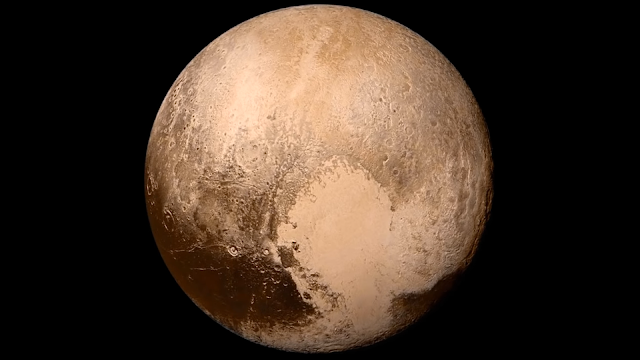 Pluto, one of the large bodies orbiting the Sun has been a matter of contention in recent years. Pluto was originally considered a planet following it’s discovery in 1930 and was regarded as a 9th planet in the Solar System for more than 75 years. In 2006, following the discovery of several other small planet like objects similar to Pluto, astronomers were forced to decide what makes a large body to be called a planet instead of something else. According to the rules agreed upon by the International Astronomical Union, Pluto was not really a planet and on September 13th 2006 it was reclassified along with the other similar small bodies as a Dwarf Planet.
Pluto is small with a diameter of only 1477 miles or 2377 kilometers and is made of rocky ice, astronomers believe that it is about 66.66% rock and 33.33% water ice, even though Pluto is small, this much ice represents more than three times the amount of water in all of Earth’s oceans combined. Pluto is the largest dwarf planet in the Solar System but not the most massive, that title belongs to Eris. Unlike the gas giants of the outer Solar System, Pluto has no rings but it does have a very thin atmosphere which is made mostly of nitrogen with small amounts of methane and carbon monoxide. Pluto is 3.7 billion miles or 5.9 billion kilometers away from the Sun and being this far away it takes Pluto 248 Earth years to complete one orbit around the Sun.

Orbit of the Pluto is highly elliptical and because of this, Pluto crosses inside of Neptune’s orbit for 20 years of each 248 year orbit, between 1979 and 1999 Pluto was actually closer to the Sun than the Neptune was, something that will not happen again for more than 200 years. Because Pluto is so far from the Sun, it is a very cold world with temperatures of about negative 390 degree fahrenheit or negative 230 degree celsius.

Pluto is also very dark, the amount of sunlight reaches it’s surface is so little that even on it’s brightest day sky would be in twilight. A day on Pluto lasts for about 6.4 Earth days and like Uranus, Pluto rotates on it’s side which results in extreme seasonal changes, with part of it’s surface in constant darkness and other part in constant daylight for decades. Pluto has 5 known moons, with latest moon discovered as recently as 2012, it’s largest and closest moon is Charon and is so large compared to Pluto that they actually orbit a point between each other causing some astronomers to call Pluto and Charon binary or double dwarf planets.

Like Neptune, Pluto was initially discovered through mathematical predictions rather than by observation, after Neptune was discovered and studied astronomers realized that there must be another planetary body out there at the edge of the Solar System and in 1906 Percival Lowell began the search for this mysterious object and at that time it was called planet X. Unfortunately Lowell died before the planet could be found and the search was interrupted for more than 10 years. In 1929 young astronomer Clyde Tombaugh arrived at Lowell’s observatory and searched through the photographs of the night sky to find anything that was shifting it’s position and on February 18th 1930 after almost a year of searching Tombaugh found the elusive planet.

The new planet was named Pluto after the Greek god of underworld and this name was suggested by an 11 year old girl from England Venetia Burney. Beginning in 1992 many other objects were found to be orbiting in the same area as Pluto, currently more than 1000 objects have been discovered in that area and scientists believe that there may be thousands of more such objects. This collection of the objects at the edge of the Solar System is called the Kuiper Belt, it is similar to Asteroid Belt between Mars and Jupiter but it is 20 times wider and perhaps as much as 200 times more massive. As more and more objects in the space surrounding Pluto were discovered, astronomers began to question whether Pluto could truly be called a planet, when Eris was discovered in 2005 it was briefly held as a 10th planet but it sparked a debate in astronomical community about what makes a planet a planet? On August 24 2006, The International Astronomical Union declared that there are 3 conditions that must be met for an object in the Solar System to be called a planet which were,

1. It must orbit around the Sun.
2. The object must be massive enough for it’s own gravity to pull it into a spherical shape.
3. It must have cleared the neighborhood around it’s orbit.

Because of all the objects that shared the Pluto’s orbit, Pluto failed to beat the third condition and along with Eris and other similar bodies was reclassified as a Dwarf Planet. There are currently 5 accepted dwarf planets in the Solar System with hundreds of more possible. Only one mission has traveled to Pluto which is the New Horizon Space Probe, it was launched in January 19th 2006 when Pluto was still considered the 9th planet.