Known by the Romans as Lunar, Selene by the Greeks and Chang’e by the Chinese, the moon is the second brightest object in the sky after Sun. During a clear night, the moon’s ancient scarred surface can be seen which reveals features such as dead volcanoes and violent impact craters. But if we could explore the moon’s grey desolate landscape we would also come across large dark mysterious holes that are scattered across its surface. In some cases, these unexplored ancient holes might lead to vast underground cave systems and so far more than 200 of them have been discovered by NASA’s Lunar Reconnaissance Orbiter.

These mysterious holes can normally be located within large craters that are ranging in size from about 5 meters to more than 900 meters in diameter and many of them may well be entrances to what are called Lunar Lava Tubes. Lave tubes are also common here on Earth and are formed wherever there has been volcanic activity. As lava flows from the volcano the surface cools down forming a hardened crust that contains the lava flow beneath like an underground river of molten rock. Then if conditions are right the lava empties leaving a hollow tube-like void below the surface. 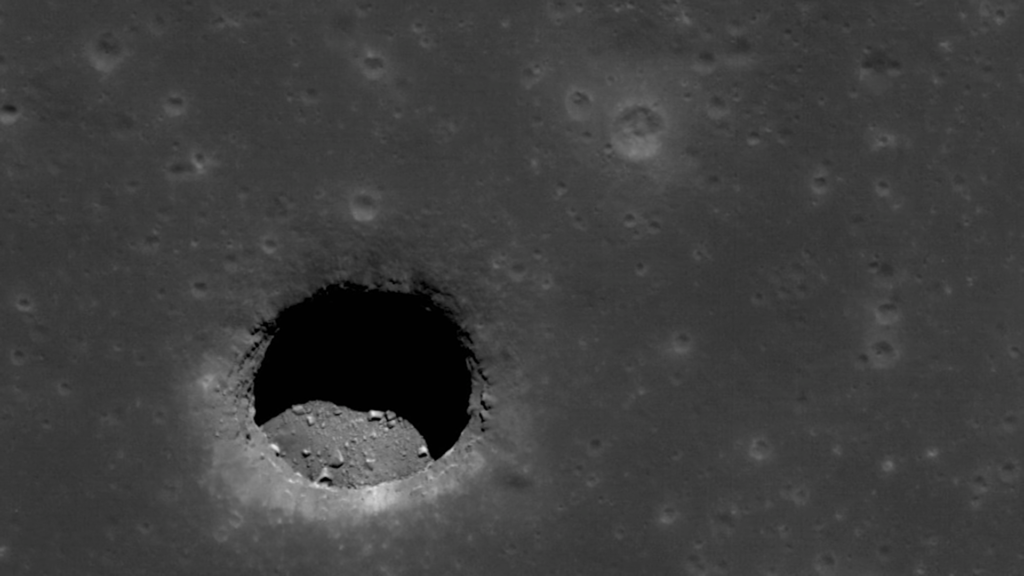 Eventually patches of the tube sealing might collapse creating a circular hole that is called a skylight and these are the holes that have been discovered scattered across the lunar landscapes. Although the moon’s surface is now a grey dead environment, but 3 to 4 billion years ago it would have looked very different. The large dark patches that are visible on moon are called Lunar Maria which is a Latin word for seas, but on the moon there are obviously not vast bodies of water but instead ancient plains of solidified lava.

Along the boundaries between these darkened areas under the lunar highlands are thought to be enormous subsurface lava tubes that could potentially one day be used as enclosures for future human habitats. The cave systems would offer shielding from dangerous cosmic radiation, protection from micro-meteorite bombardments and also an environment for human-friendly temperatures.

A NASA mission that has been nicknamed Moon Diver has been proposed and it would send an extreme terrain rover into some of the several deep pits rappelling down the wall to expose the history of the lunar surface, revealing the moon’s volcanic past but also illuminating a potential future human habitat.