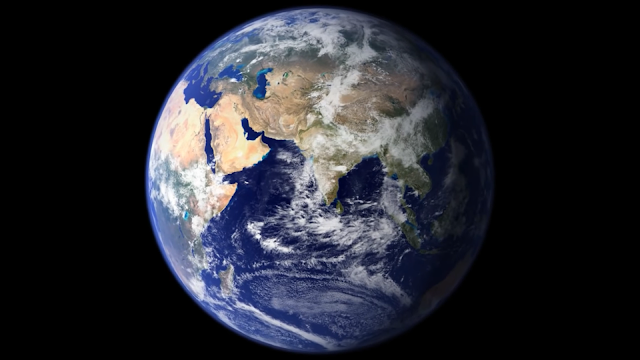 Earth is the third planet from the Sun. We probably already know a lot about planet Earth because it is the planet where we live, it is our home in this endless Universe. Although Earth is the largest of the inner planets or the four rocky planets that orbit nearest the Sun, the Earth is far smaller than the gas giants that circle the outer edges of Solar System. The Earth is also the first planet when travelling out from the Sun to have a moon and the only planet in the Solar System to have only one moon.

The Earth is the unique among the planets of the Solar System, because Earth is the only planet to have liquid water on the surface, other planets are either too hot causing all their water to evaporate into gases or too cold causing any water they have to freeze into ice. The Earth is about 93 million miles or 150 million kilometers away from the Sun which keeps it at just the right temperatures to have liquid water or in other words we can say that the Earth orbits in the Goldilocks zone of our Sun. Earth has a lot of water, more than 70% of the Earth’s surface is covered by oceans that means, oceans are more than twice the size of all of the land on Earth and because it has so much water on it, it is sometimes called The Blue Planet. Liquid water is what allows life to exist on Earth and as far as we know Earth is the only place where life exists, millions of species of plants and animals call the planet Earth home including us the humans.

Earth’s atmosphere is another important feature, the atmosphere is a thick layer of gases that cover the entire Earth, it is mostly made of nitrogen and oxygen. The atmosphere is what allows us to breath, it also helps keep the Earth warm by acting like a blanket to hold in Sun’s heat, another way our atmosphere helps us is by protecting the Earth from harmful radiations coming from the Sun and also from Meteors, anything falling to the Earth from space is rubbed against the gases in the atmosphere until they are burned, most things burn up completely before they reach surface of the Earth but even anything that makes it through becomes much smaller by the time it hits the ground. The Earth goes around the Sun, the time it takes to go around the Sun is called a year and it takes the Earth about 365 days to travel around the Sun once, that is why a year is usually 365 days. The Earth also rotates or spins about it’s axis and the time is takes to rotate once is called a day, the Earth rotates every 24 hours and that is why a day is 24 hours long.

Earth does not rotate straight up and down, it is tilted, there is an imaginary line through the Earth from the north pole to the south pole which is called the Earth’s axis and this axis is tilted at about 23 degrees and this tilt plays an important role because this tilt of the Earth’s axis is what causes the seasons, when part of the Earth is tilted towards the Sun it will be summer there and when it is tilted away from the Sun it will be winter instead.

The inside of the Earth is very different from the outside, if we cut the Earth into half we could see that it is made up of different layers, the outer most layer which is called the crust is where we live. The Earth’s crust is cool and solid, everything we see around us is sitting on the top of Earth’s crust. The crust is so thick that humans have never been able to dig deep enough to break through it, but the crust is only a thin layer on the surface of the Earth, underneath the crust is the mantle. The mantle is a thick layer of molten rock or magma, it is the thickest layer of the Earth. Sometimes magma from the mantle would come up to the surface through volcanos.
The core is at the very center of the Earth and is very very hot with a temperatures of thousands of degrees, it is made of metal mostly iron and nickel and even though it is very hot it is under so much pressure that it is solid. The Earth is important to us because it is our home, about more than 7 billion people live on the Earth right now as well millions of species of plants and animals and so far we have not found any other planet in the entire universe that would make a good home for us.