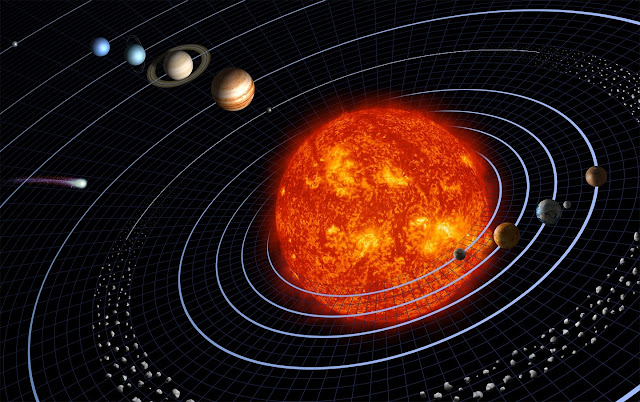 Have you ever looked up into the infinite night sky and wondered what exactly lies beyond the vision of our naked eyes? Well, a whole host of fascinating objects spin in outer space waiting to be discovered. Fasten your seat belts and imagine for a moment that we can leave our mother Earth behind and explore the Solar System that surrounds it, we call it the Solar System because everything in it is centered around Sun and solar means something to do with the Sun. Our Solar System along with the Sun consists of 8 planets namely Mercury, Venus, Earth, Mars, Jupiter, Saturn, Neptune and Uranus. Along with the planets our Solar System consists of Asteroid Belt, Kuiper Belt and Oort Cloud. Let’s know a little more about each of these starting from our star the mighty Sun. 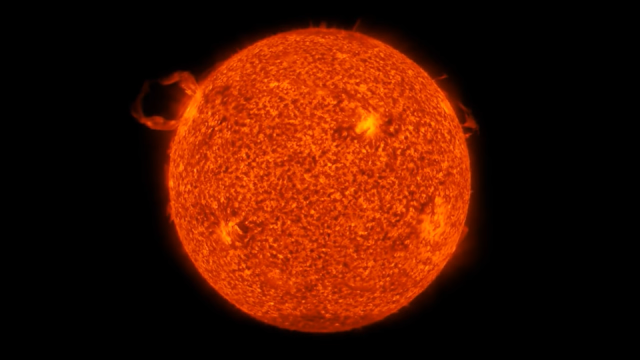 Our Sun is a star just like millions of other stars that we can see in the night sky, just many times closer to us. Although the Sun is closest star to us, it is still very very far away from the Earth which is almost 93 million miles or 150 million kilometers away and that is why it looks so small even though it is the biggest object in the Solar System, in fact the Sun makes up more than 99% of the mass in the Solar System. If you put all of the planets, moons, asteroids and everything else in the Solar System together they would make up less than one quarter of a percent of it. 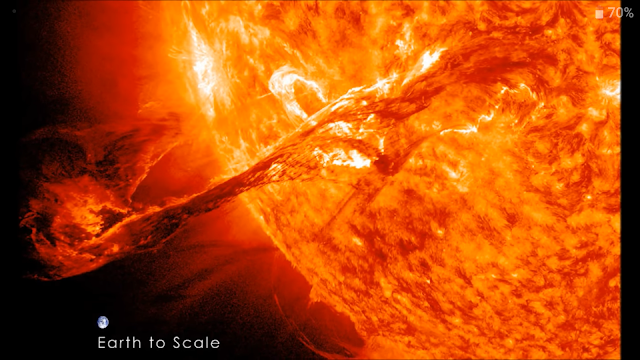 The Sun is so big that it is more than 100 times wider than Earth and we can fit more than a million Earths into it, more than that the Sun is what that holds the Solar System together, its incredible gravitational pull is what keeps the Earth and all the other planets circling around it instead of drifting off into space. The Sun is also what allows us to live on Earth, without the Sun there would be no heat, there would be no light, plants could not grow, water would freeze and nothing can survive.

As we move away from the Sun the first planet that we will encounter is Mercury and it is the closest planet to the Sun at a distance of 36 million miles (58 million kilometers). Mercury is the smallest planet in the Solar System much smaller than the Earth and one of only 5 planets that we can see from the Earth using nothing but our naked eyes, off course it wont look much like a planet it looks more like a bright star when seen from the Earth. Mercury is a lot like our moon, it is small and has a rocky surface with crators on it.

It has no moon of its own and no air to breath. We probably would not enjoy visit to the Mercury since temperatures are boiling hot in the sun and freezing cold in the shed since it has no atmosphere to trap the heat. Something interesting about mercury is that it is fastest planet to go around the Sun since it is the closest planet to the Sun. Mercury takes just 88 Earth days to complete one orbit around the Sun where as Earth takes 365 days to do the same. To know more about Mercury click here.
VENUS

The second closest planet to the Sun is Venus at a distance of 67 million miles (108 million kilometers) and it takes 255 Earth days to orbit around the Sun. Venus is often called as Earth’s sister because the two planets are very close in size and gravity but they are very different on the surface. first of all it is very hot, Venus is the hottest planet in the Solar System even though it is not the closest planet to the Sun which is Mercury.

It is the hottest planet because of it’s thick atmosphere of carbon dioxide which helps it to trap the heat coming from the Sun and stay warmer than its neighbor. It has a thick atmosphere but it is not the one we could breath, it is mostly made of carbon dioxide and there are clouds of sulphuric acid. Venus might not be the fun to visit but it is beautiful to look at. it is the second brightest object in the night sky and the only thing brighter is the our own moon. To know more about Venus click here.
EARTH 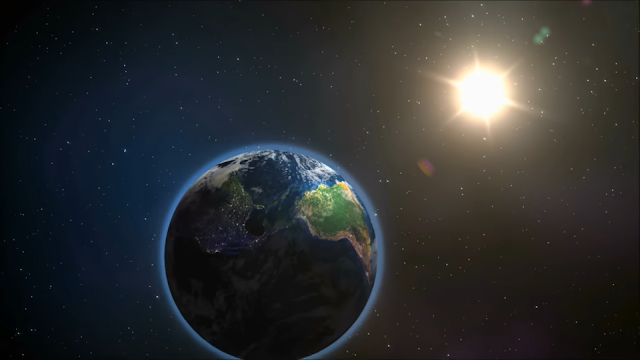 After Venus comes the Earth, the third planet from the Sun at a distance of 93 million miles (150 million kilometers) and it takes 365 days to orbit around the Sun. Off course we all know about earth because that’s the planet where we live. Earth is what is called a goldilocks planet because it is not too hot and not too cold, it is just right for the water to stay in the liquid state which is the main ingridient for life formation. As far as we know, Earth is the only planet to have living things. To know more about Earth click here.
MARS 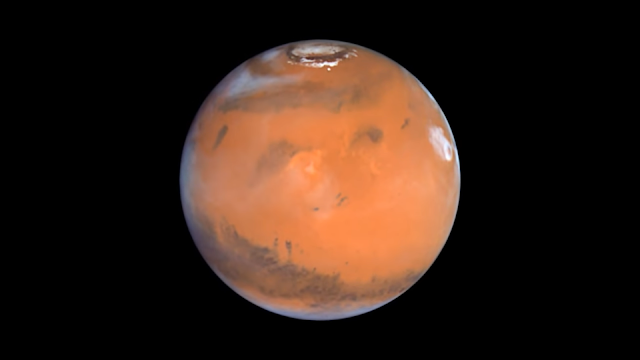 Mars is the fourth planet from the Sun at a distance of 142 million miles (228 million kilometers) and it takes 687 Earth days to orbit around the Sun.. Mars is known as the Red Planet because of the iron oxide, a material like rust in the soil which gives it a reddish colour.

Mars is smaller than the Venus and Earth but larger than Mercury. It is cold and rocky with a thin atmosphere made of carbon dioxide and oxygen. There is water ice on Mars, scientists are very interested in Mars because they think that humans could live there with the help of some special equipments. Rockets and probes have already been sent there to gain more information about the planet. Right now there are two special robots namely Curiosity and Opportunity rovers exploring surface of the Mars and sending information back to earth. Mars has two moons, although they are not big and round like our moon. Mars’s moons are small and irregular, scientists think they may be captured asteroids from the asteroid belt which exist between Mars and Jupiter. To know more about Mars click here. 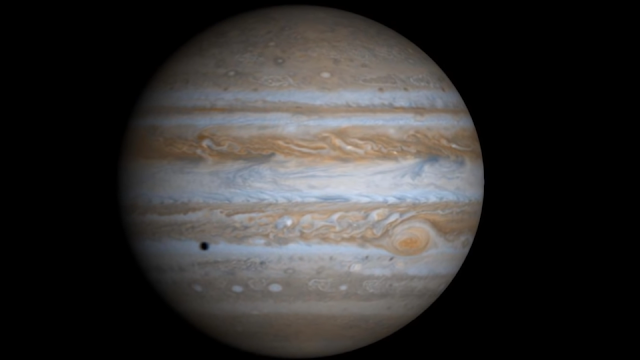 Jupiter is the fifth planet from the Sun at a distance of 484 million miles (778 million kilometers) and it takes 12 earth years to orbit around the Sun. Jupiter is the largest planet in the Solar System and it is a Gas Giant. Planets are called gas giants which are massive and made of gases.

Jupiter is so huge that we can fit almost 11 earths across its diameter. Jupiter is also the third brightest object in the night sky, only our moon and Venus are brighter. Jupiter has 79 moons which are discovered so far that orbit around it but 55 of them are very small, only about as big as mountain or smaller. Some of its moons are very large and at least two of them are about the same size as the planet Mercury. One of its moon is the largest moon in the solar system which is Ganymede. Some of these large moons can be seen from the Earth with the help of telescope.

We cannot land on Jupiter because it is made of gas and there is no ground to land on. Even if there was somewhere to land, Jupiter is covered  by terrible storms which are many times stronger than even the strongest storms that can form on earth. One storm that we know about can be seen from the Earth and we call it The Great Red Spot because that is what it looks like and it has been going on from at least more than 200 years. To know more about Jupiter click here. 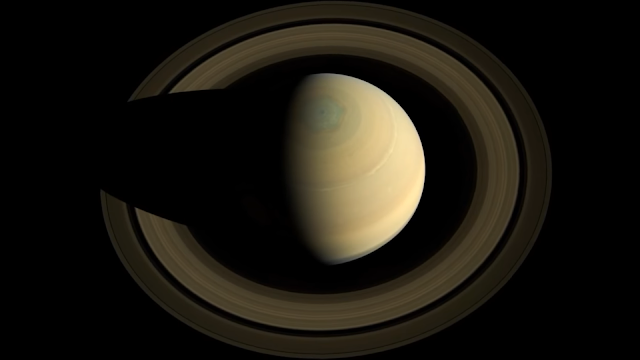 After Jupiter comes another gas giant which is Saturn and is 891 million miles (1.4 billion kilometers) from the Sun. Saturn takes 29 Earth years to orbit around the Sun. Saturn is famous for its beautiful rings, although these rings look solid from distance these rings are actually made of many many small ice particles as well as rocks and dust. 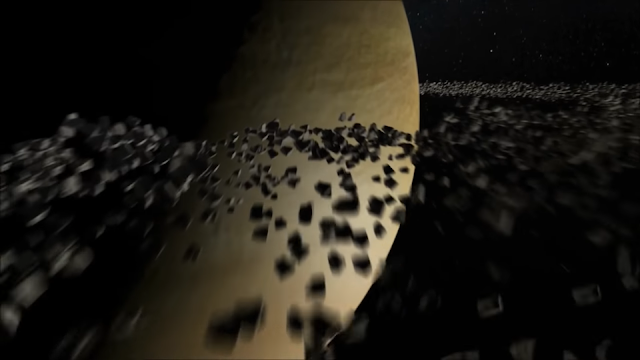 Saturn also has more than 60 moons orbiting around it, some moons are as big as planet Mercury and many. smaller. Something very interesting about Saturn is that, even though it is very large it is not very dense, that means if we could find a bath tub large enough to fit Saturn in it, the Saturn will float on the water instead of sinking. Saturn is the farthest planet that can be seen from the earth without the help of any telescope. To know more about Saturn click here.

URANUS
Uranus is the seventh planet from the Sun and it is also a gas giant at a distance of 1.7 billion miles (2.8 billion kilometers) from the Sun. Uranus takes whopping 84 Earth years to complete orbit around the Sun. Uranus is much smaller than Saturn and Jupiter. Unlike any other planet in the solar system, it is tilted so much that it actually spins sideways. Uranus has rings around it although they are much smaller than Saturn’s and it has 27 known moons. Uranus is covered in blue clouds made of methane which give it blue colour. To know more about Uranus click here.
NEPTUNE
Neptune is another gas giant and is last planet in our Solar System, it is very similar to Uranus. It is eighth planet from the Sun and like Uranus it has methane in its atmosphere so it also appears blue. Neptune is darker blue than Uranus and scientists are yet to discover the possible reason behind it. Neptune has few thin rings and 14 moons that we know about. Neptune is 2.8 billion miles (4.5 billion kilometers) away from the Sun and this makes it take a very very long time to go around the Sun, how long? well it takes over 165 earth years to complete orbit around the Sun. The last time that Neptune was in the same place as it is now was before the american civil war, before computers, phones, airplanes or cars had been invented. Neptune obviously has the longest orbit of any planet in the solar system.
ASTEROID BELT 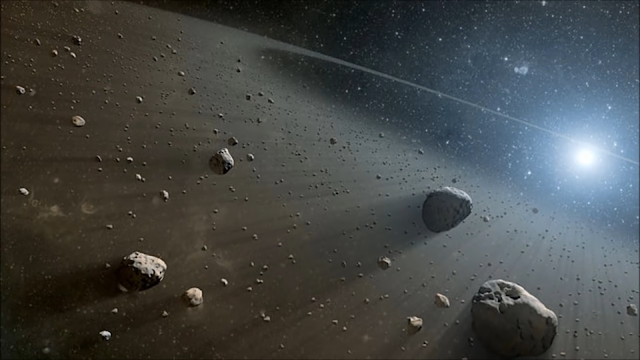 Asteroid Belt is a region of 550 million kilometers between the orbits of Mercury and Jupiter. In this region a huge number of asteroids are orbiting, ranging in size from a few meters to hundreds of kilometers across. Some of these asteroids have even satellites orbiting around them just like how our earth has moon around it. All rocky planets we know today were actually originated from the combination of asteroids, but interestingly the asteroids in asteroid belt could never form a planet due to the strong gravity of Jupiter. More than 99.8% of the 30000 Meteorites found so far on the Earth have come from Asteroid belt.
KUIPER BELT 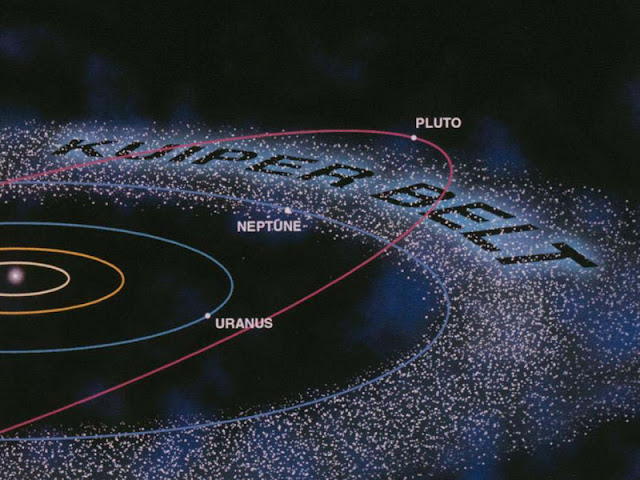 Kuiper Belt is similar to the Asteroid Belt but is about 20 times larger. Unlike Asteroid Belt which is mainly composed of rocky objects, Kuiper Belt mostly contains ice bodies. It is currently considered along with the Oort Cloud as the main source of comets in our Solar System.
OORT CLOUD 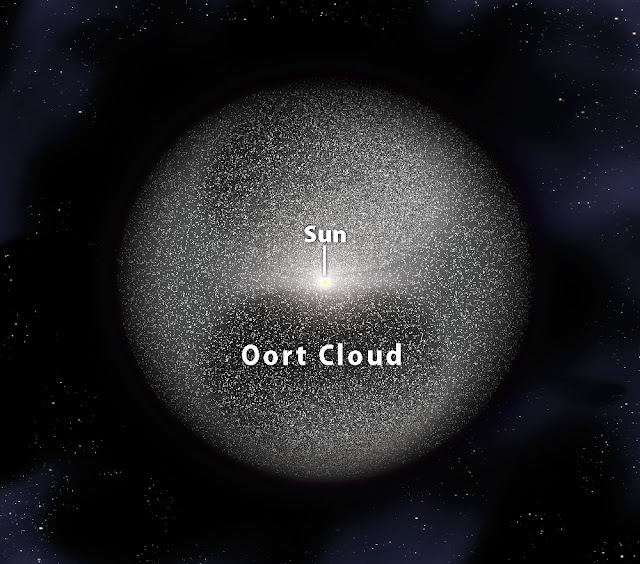