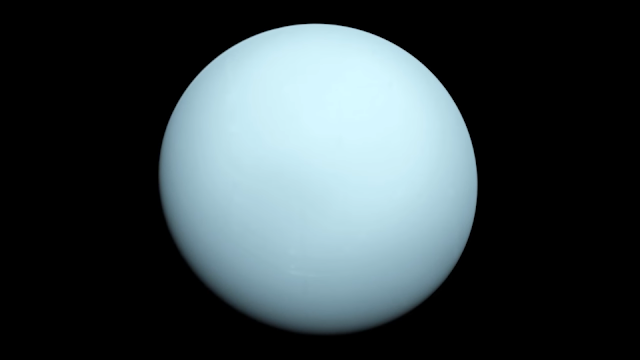 Uranus is the seventh planet from the Sun and is third largest planet in the Solar System after Jupiter and Saturn. Like Jupiter and Saturn, Uranus is also a gas giant and is made largely of Hydrogen and Helium but it also has many more icy compounds which are made of water, ammonia and methane and because of this Uranus is also sometimes referred to as an Ice Giant. With a temperatures of about negative 371 degree fahrenheit or negative 224 degree celsius Uranus has the coldest atmosphere of any planet in the Solar System even though it is not the farthest planet from the Sun which is Neptune.

Uranus is about 4 Earth’s wider and it has a core which alone is the size of Earth, the core is made of Iron and Magnesium silicate and the remainder, approximately 80% of Uranus is a worldwide oceans of ices made of water, ammonia and methane which is the chemical behind planet’s blue color, this icy composition prevents Uranus from generating much internal heat and as a result the weather on Uranus is colder compared to the other gas giants. Uranus is more than 1.7 billion miles or about 3 billion kilometers from the Sun and because it is so far away it takes Uranus almost 84 Earth years to orbit around the Sun and that means each season on Uranus lasts for 21 Earth years, in addition Uranus is tilted much more than the Earth is.

In fact, Uranus is the only planet in the Solar System to be tilted so far that it actually rotates nearly sideways in it’s orbit and this makes Uranus one of the only two planets (Venus is the other one) in the Solar System to rotate in the direction opposite to rest of the planets. This tilt makes the seasonal changes on Uranus extreme, during winter and summer even though the planet continues to rotate at regular 17 hour intervals, the summer side faces constantly towards the Sun and winter side stays in complete darkness. Uranus is one extremely windy planet as well with winds of up to 560 miles or 900 kilometers per hour recorded.

Only one spacecraft has ever flown by Uranus, Voyager-2 which passed the planet in 1986, it just so happened that at that time the northern hemisphere of Uranus was in winter and so the images that Voyager-2 recorded were of almost featureless blue planet, in the years since then the seasons have changed and Uranus has revealed more interesting weather patterns. Although it is somewhat possible to see Uranus with unaided eye in good viewing conditions, it was never recognized by ancient people as a planet and was thought to be a star. It was Sir William Herschel who first recognized that it was not a star in 1781 which made Uranus the first planet to be discovered with the telescope.

At first Herschel named it Georgium Sidum or George’s Star in honor of king George the third but other astronomers felt that the planet’s name should stay aligned with the mythological origins of the other planets. The name Uranus was selected after the Greek god of the sky and in less than 70 years of it’s discovery Uranus is what the planet universally called. Uranus has a system of 13 faint rings and 27 moons circling around it. William Herschel first claimed to see a ring around Uranus in 1789 but rings were not confirmed until nearly 200 years later in 1977. Herschel also discovered two of the planet’s five large moons, some of Uranus’s small moons were still being discovered as recently as the early 21st century.