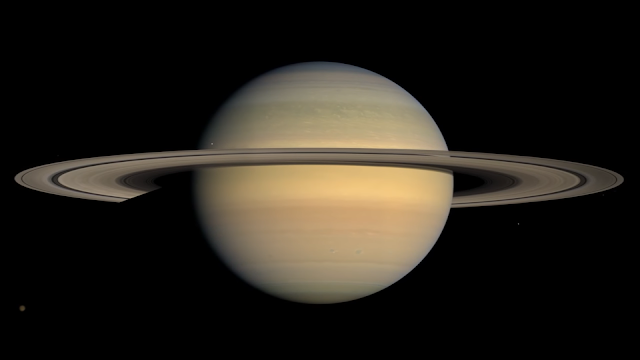 Saturn is the sixth planet from the Sun and is second largest planet in the Solar System, smaller only than Jupiter. Saturn is easy to identify because of the large system of rings surrounding it. Just like Jupiter, Uranus and Neptune even Saturn comes under the category of Gas Giants. Saturn is mostly made of Hydrogen and Helium with crystals of ammonia in the upper layers of it’s atmosphere which gives it it’s pale yellow color. Although the outermost layers of Saturn are made of gases, scientists believe that if we travel down through the atmosphere we would eventually find that the Hydrogen and Helium are in liquid state and if we go even farther down they become metallic and in the center of the planet there is a hard rocky core.

Saturn is the least dense planet in the Solar System, although it is much larger than the Earth, which is about 9 times wider and 95 times more massive, it is only about 12% as dense as Earth is and that means if we could find a bath tub large enough, the Saturn would float in the water. Like Jupiter, Saturn has storms and stripes of clouds but they are harder to see because of their pale color. However, winds on Saturn are much faster than Jupiter’s winds, in fact Saturn has the second fastest winds in the Solar System which can reach speeds up to 1800 kilometers per hour, the only planet with winds faster than Saturn’s is Neptune.

Saturn is very far from the Sun which is about 890 million miles or 1.4 billion kilometers away, as a result Saturn takes very very long time to travel around the Sun which is about 29 Earth years. However Saturn spins or rotates about it’s own axis much faster when compared with Earth’s rotation, Saturn takes less than 11 hours to rotate about it’s axis compared to Earth’s 24 hours. Saturn is the farthest planet that can be seen by humans without the help of telescope in the night sky and so it has been known to humans since thousands of years. The word Saturn comes from the name of the ancient Roman god Saturn or Cronus who is the god of wealth and agriculture. Although ancient astronomers knew about Saturn, no one knew about it’s rings.

The rings of Saturn are not visible without the help of the telescope and so it was not until the astronomer Galileo used his telescope to observe Saturn in 1610 that people knew that there was anything different about it at all. When Galileo saw Saturn’s rings he did not really know what they could be, he initially thought that they might be moons or smaller planets, but it was not until later when stronger telescopes were made, astronomers realized that the Saturn is surrounded by wide flat rings.

Saturn’s rings are about 175000 miles or 282000 kilometers across but only about 30 feet or 10 meters thick. These rings are made of many pieces of ice and rocks which ranges from the size of the sand grain to the size of a bus. Scientists believe that the rings may have formed when the comets, asteroids or even moons collided or ripped apart by Saturn’s gravity and as time went on these pieces may have continued colliding with each other resulting in smaller and smaller pieces. In addition to rings, many moons and satellites orbit around Saturn, it has at least 62 moons and perhaps 100 more smaller bodies also circling around it.

Saturn’s largest moon is the Titan and is also second largest moon in the entire Solar System, smaller only than the Jupiter’s moon Ganymede. Scientists are very interested in Titan because it is the only moon in the Solar System known to have dense atmosphere which is composed of mainly nitogen with some methane and hydrogen present. Titan is also the only celestial body aside from Earth that has ever been found to have bodies of liquid on it’s surface. These liquid bodies are not made of water because the surface of Titan is far too cold for liquid water to exist, so the lakes and seas of Titan are filled with Ethane, Methane and Propane. So far only four spacecrafts have flown by Saturn, beginning with Pioneer 11 in 1979 and quickly followed by Voyagers 1 and 2 in the early 1980’s, no other missions visited Saturn for more than 20 years until the Cassini spacecraft arrived in 2004 and began orbiting the planet until September 17 of 2017 when Cassini spacecraft made a fateful plunge into Saturn’s atmosphere ending it’s mission.