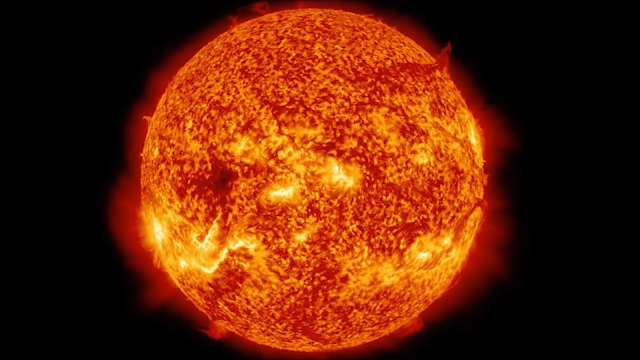 The Sun is a center of our solar system, each and every object that exist in our solar system revolves around the mighty Sun. Our Sun formed about 4.5 billion years ago in the Milky Way galaxy’s Orion Spur region, it was born when the cloud of dust and gas known as Solar Nebula collapsed and in the middle of this formation matter condensed into a burning ball of gas that became our Sun.
The Sun is a star, not so different from the stars that we see in the night sky, it looks different and bigger because it is many times closer to us than any other stars that can be seen from the Earth and that makes the Sun the closest star to Earth. The Sun is closest to us compared to other stars but still it is very far from the Earth which is about 93 million miles or 150 million kilometers away, although the Sun is so far away it only takes sunlight about 8 minutes to reach the Earth since light is the fastest travelling thing in the universe.

Because of how far the Sun is from us, it seems much smaller than it really is, The Sun is more than 100 times the width of the Earth, the Sun is so large that if it were a hollow ball more than million Earths could fit inside the Sun. The Sun is the largest object in the solar system, in fact if we collect everything in the solar system including the Sun, planets and dwarf planets, comets, asteroids and moons the Sun would account for more than 99% of it with everything else adding up to less than 1% of the solar system. As far as stars go however, the Sun is average or even small in size, the Sun is called a yellow dwarf and there are billions of yellow dwarfs in our Milky Way galaxy alone.

The Sun can be divided into six layers or regions namely Corona, Chromosphere, Photosphere, Covective zone, Radiative zone and the core. In terms of atom count the Sun is about 91% hydrogen which is the Sun’s fuel, 8.9% helium and 0.1% heavier elements such as carbon and nitrogen, due to the Sun’s extreme temperatures these elements stay in a gas like phase called Plasma. Like all other stars the Sun is made of gases, mostly hydrogen, helium and traces of some other elements, these gases are held together by Sun’s gravity which creates such intense heat and pressure that it causes nuclear fusion which is a process where hydrogen atoms fuse to create helium at it’s core.

The temperatures of Sun’s core are about 27 million degree fahrenheit or 15 million degree celsius, by the time the heat from the Sun’s core reaches it’s surface temperatures drop considerably and because of that the surface of the Sun is at much lower temperatures which is about 10,000 degree fahrenheit or 5500 degree celsius compared to core. Unlike the Earth or any other rocky planet the Sun does not have a solid surface, you may be surprised to learn that the Sun’s gassy surface is not calm and quite, instead the Sun is constantly moving and changing with sunspots or dark patches at cooler temperatures and solar flairs or eruptions of high energy radiation frequently marking it’s surface.