Could There Be Life On Enceladus The Moon Of Saturn? 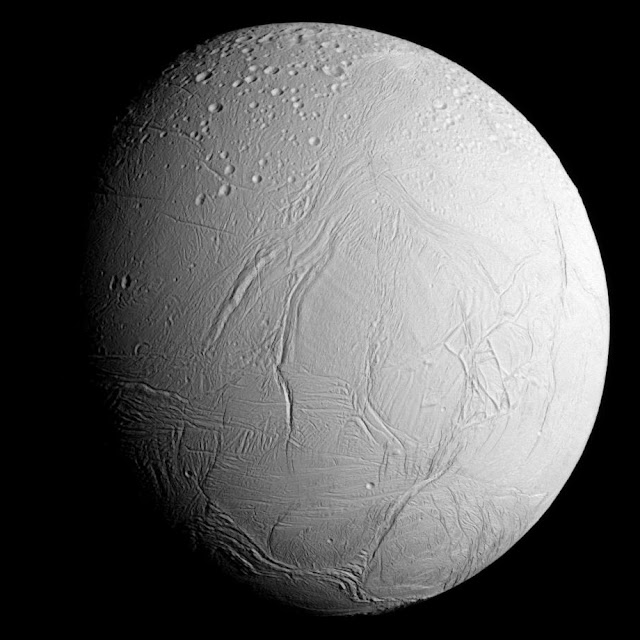 Enceladus is a moon of Saturn and despite the fact that it is one of the smallest spherical moons we know of, it is also one of the interesting moons we know of, that is because the Enceladus has an ocean underneath it’s surface. Scientists believe that there is a huge ocean underneath because Enceladus showed a very wobbly surface which could only be possible if there is a huge chunk of liquid water underneath the surface, also there are huge jet streams on Enceladus spewing water at a rate of 250 kilograms per second with a speed of 2100 kilometers per hour which means Enceladus is losing 250 kilograms every second.

Cassini which was a probe around Saturn flew over one of the jet streams on Enceladus and it detected water but interestingly it also detected Hydrogen, Carbon, Nitrogen and Oxygen which are four out of six essential chemicals for life, but Phosphorous and Sulfur which are the remaining two could also be present on the Enceladus at it’s core. Cassini also detected more complex organic molecules such as ammonia, methane, propane, benzine and few others which shows that there are lot of activities going on underneath the moon.

Around the jet streams of Enceladus the hot spots have been found which means there are hydro-thermal vents underneath the jet streams providing heat energy in the ocean, hydro-thermal vents also exist on Earth and that’s where the life started on Earth. Interestingly researchers conducted an experiment recreating the known conditions of Enceladus’s ocean and found one single celled micro-organism which could thrive in the environment of Enceladus and that organism is called Methanothermococcus Okinawensis, so this does not necessarily prove that there is life on Enceladus but it does show that it is absolutely possible for life to exist there. But another not so exciting news is that the Enceladus is just about 100 million years old which is relatively very young and it means that not enough time passed for these complex compounds to turn into a simple life forms. The Cassini mission is over which explored Enceladus, Saturn and it’s other moons, the moon purposefully crashed into Saturn not to contaminate Enceladus with life forms from the Earth that could have stayed alive on the spacecraft. It would be really interesting if we could drill through the many kilometers thick ice of Enceladus and get down to the bottom of the ocean and see if there is any life but sadly there are no plans for such missions as of right now but still there are many exciting missions awaiting us.