‘IC 1101’ The Largest Galaxy In The Known Universe 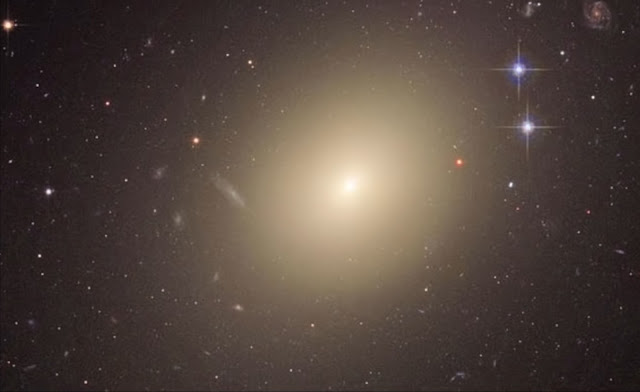 One intriguing question to ask is, of all the giant galaxies which are in hundreds of billions in number in the observable universe, which one is the largest? what is the largest galaxy humans have ever seen? the answer to these questions is ‘IC 1101’, this elliptical galaxy is located 1 billion light years away in the constellation Virgo and is the largest galaxy in the known universe.

This galaxy is enormous, it has a diameter of mind boggling 6 million light years and has a mass of over 100 trillion stars, but most of that mass is in the form of elusive dark matter. IC 1101 is more than 50 times the size of our own Milky Way galaxy and 2000 times as massive, if we put this galaxy in the place of Milky Way galaxy, it would swallow up the large Magellanic cloud, small Magellanic cloud, the Andromeda galaxy and Triangulum galaxy.

IC 1101 has spent most of it’s time colliding with other galaxies, over billions of years, galaxies about the size of the Milky Way and Andromeda have been merging together to sculpt and shape this titan of the cosmos. This galaxy is bereft of star making gases, here the rapid star formation has long ago seized because of the lack of gas and dust, very few new stars born compared to galaxy’s earlier days and instead the stars that are remained provide the only source of fuel for the galaxy.

Through a telescope, in contrast to the blue tinged spiral galaxies IC 1101 is yellow-red in color and the color of the galaxy says a lot about the stars it contains, blue galaxies are alive and vibrant with new stars while the yellow-red tinge of ellipticals signals almost none. IC 1101 and other ellipticals contain at it’s center a super-massive black hole, it is commonly understood that the mass of the galaxy’s central black hole is tightly linked to the size of the galaxy which makes the black hole at the center of IC 1101 the largest known super-massive black hole.

This galaxy is sadly dying a slow death, unless it continues to merge with new or younger galaxies IC 1101 will slowly fade away in the darkness of space. Galaxy collisions and mergers are the pulse of the universe and with each collision and merger galaxies are supplied with the fuel for the new star formations keeping them vibrant and young, over time however these collisions take the toll, the central super-massive black holes devouring all the encounter and leaving behind the shells of ever aging stars. If some theories prevail, then our universe is may be about 2 billion years away from the halfway point in it’s life, as our Milky Way galaxy participates in the great cosmic dance of collides and mergers forming spirals to ellipticals and ultimately sharing the fate of IC 1101 which is fading away in the darkness of the space one day.