Standing On ‘Ceres’ The Closest Dwarf Planet To Earth 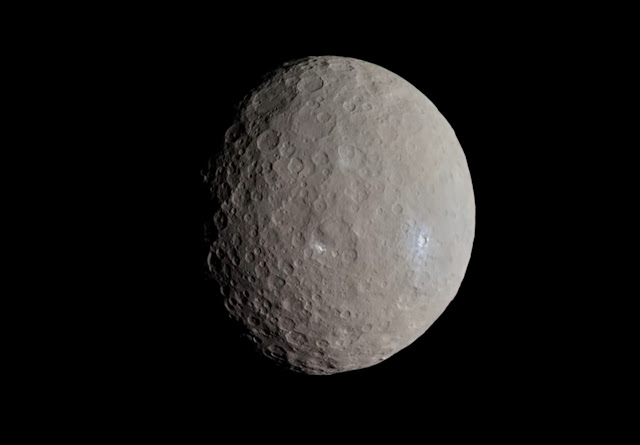 Ceres is the closest dwarf planet to Earth and it is located between the orbits of Mars and Jupiter in the Asteroid Belt. We mostly learned about this dwarf planet through Dawn Spacecraft which was sent in 2007 and it arrived in 2015. Dawn spacecraft took 8 years to reach Ceres but that is also because it stopped by to visit Mars and the biggest asteroid in Asteroid Belt named Vesta.

But if we’re to be the one chosen to land on Ceres then with current technology a spaceship could take us to Ceres within around a year and that is because to get to Mars it takes on average about 7 months and since Ceres is a bit less than 2 times further away that is why the trip would be a year-long to Ceres.

So let’s say we got onto the spaceship, as we would approach Ceres it would be apparent that the object is very round but also heavily cratered resembling our moon a bit but also it is a lot darker so most likely we would be sent to explore the most mysterious place on the Ceres which is the Occator crater.

Occator crater is a 90 kilometers long crater that has two huge bright spots, as we land here and step onto the surface of Ceres, it would be noticeable that we are very light and we would move around very fast without any exhaustion and this is all because the gravity on Ceres is 35 times weaker than on the Earth.

As we would look into the distance at the center of the Occator crater there would be a huge bright spot which would be reflecting a lot more light than the rest of the surface. The bright spot would be surrounded by mountains and in the background, the visible ridge of the crater would be apparent.

When we would get to the bright spot and examine it on the ground, it could seem like we are looking at some form of snow, but it would be obvious from the texture that it is not snow and instead what we would be looking at is a form of salt that is salt mixed with a bit of water and no one really knows how that salt got there in such huge quantities all at one place and there are quite a few of those salt deposits throughout the whole surface, some suggest that it originated inside of Ceres. 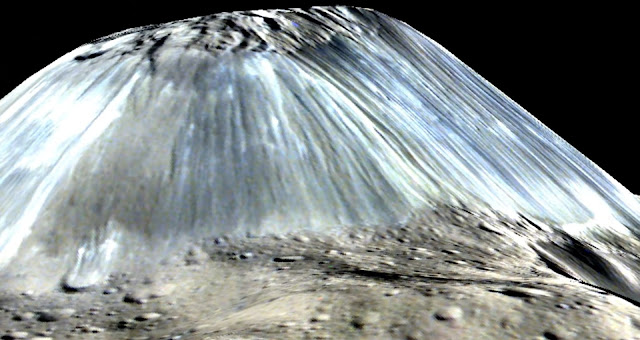 After we explore the salt deposits, it would be the time to get to a cryovolcano, a volcano which spews cold material, this volcano is named Ahuna Mons. As we would look into the distance, a huge, very smooth volcanic structure would be present, the whole mountain is 4 kilometers tall which makes it tallest on the Ceres, but despite the fact that it is so tall, we can climb it easily since the gravity is so low, this cryovolcano formed over time as the spewed material accumulated and formed this mountain but interestingly what is weird about it is that it is the only one found on the whole surface of Ceres. 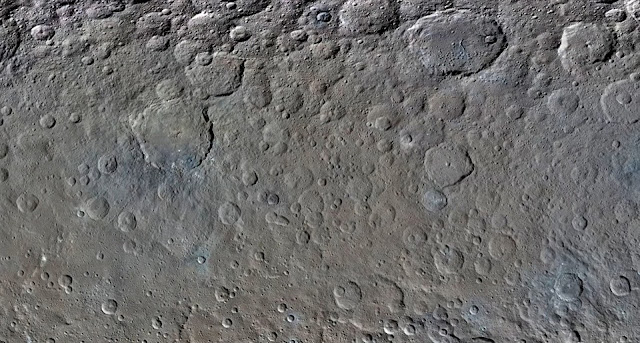 As we would explore the whole surface, generally there would be many craters and mountains and there would be pretty much no flat areas, it is an old surface which was bombarded with asteroids, now it would be apparent that despite the fact that things would seem big, they would not be as big as they are on Earth because the whole surface area of Ceres is as big as the surface area of Egypt, so yeah this dwarf planet is tiny and is only 940 kilometers or 584 miles in diameter. While looking at the sky, it seems kind of odd since it is in the vacuum of space but the vacuum of space also means that we would be able to some stars during the day, so Ceres is quite an interesting dwarf planet and relatively speaking it is not that far away on the cosmic scale.