What Will It Look Like When The Star Betelgeuse Goes Supernova? 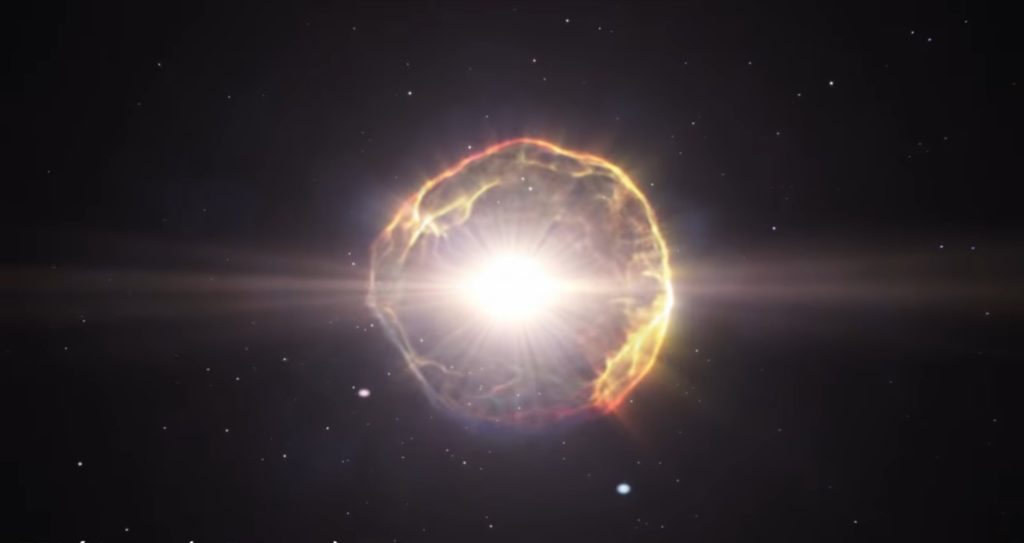 One day, in around 5 billion years from now the Sun will swell into a red giant as it runs out of hydrogen and enters into the final stages of it’s life cycle, although the Sun’s ending will obviously be a colossal event for our solar system it is nothing compared to other more massive stars that can swell into rare red super giants under the correct intense conditions and eventually exploding in a catastrophic event which is known as a Supernova.

At an estimated 640 light years away, there is a star which is so big that if it was at the center of our solar system it would consume the orbits of Mercury, Venus, Earth, Mars and possibly even Jupiter, this gigantic star can be located in the constellation of Orion and it is one of the 10 brightest stars in the night sky, the name of the star is Betelgeuse. Also known as Alpha Orionis, Betelgeuse is a huge red super giant star that fluctuates in size from between 700 and 1000 times the diameter of the Sun making it one of the largest known stars in the Milky Way galaxy.

Betelgeuse is about 10,000 times brighter in visible light but if the human eye could view all the wavelengths of radiation it would be the brightest star in the night sky, the reason for it’s variable size and brightness is because the colossal star is nearing the end of it’s life cycle, at 10 million years of age it is already an old super giant star, Betelgeuse would have burnt through it’s hydrogen relatively quickly, reducing it’s life span considerably compared to smaller stars such as our own Sun which is expected to exist for about 6 billion more years from now.

What makes this distant star special from our perspective however is that within the next million years or so Betelgeuse will explode in a magnificent Supernova that will be visible from Earth. As a red super giant, Betelgeuse’s innermost region will be fusing heavier and heavier elements until it’s core is so heavy that it cannot withstand it’s own gravitational force, during the final moments the colossal star’s core will collapse in on itself and cause a giant explosion, after an initial brief flash, Betelgeuse will increasingly grow in luminosity over a period of weeks and becoming millions of times more brighter than the Sun.

From Earth, the explosion may be as bright as the moon and could potentially still be visible during the day, it may also last for a couple of weeks or even months and eventually fading away into darkness of space. Because Betelgeuse is estimated to be 640 light years away it does mean that the bright star may have already gone supernova at any time from 14th century onwards, but this is not the first time a magnificent celestial events like this has been viewable from Earth as recently a 1604 Kepler star exploded in a supernova event that lasted for over 3 weeks and it was bright enough for it to be visible during the day, since then many of the stars outside of the Milky Way galaxy have also exploded but none as close as Betelgeuse.

According to scientists, Betelgeuse’s colossal distance from us means it would be unlikely that the radiations from the supernova would affect Earth and that the explosion would have to happen within 25 light years to cause any real problems.​

So if you want to keep an eye on Betelgeuse, then the distinctive star can be located in the upper left corner of the Orion constellation and appears as a reddish orange colored star, but when you observe it, remember that flickering distant source of light may have already exploded and the light from the cataclysm is potentially on it’s way towards you ready to cause a spectacular once in a lifetime celestial show.