How Does The Surface Of Moon ‘Titan’ Looks Like? 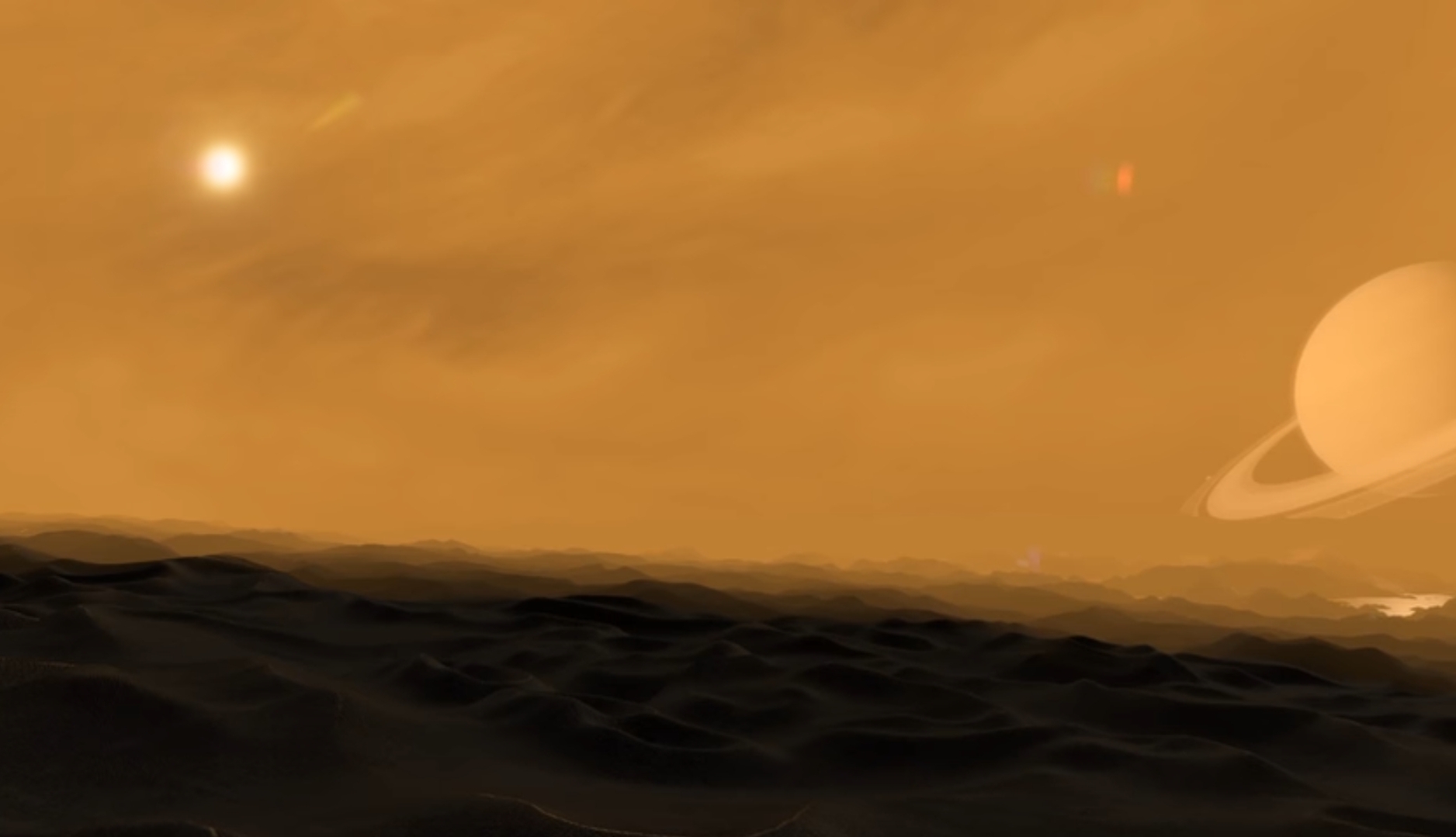 Saturn and it’s spectacular icy ring system has fascinated it’s observers for hundreds of years ever since Galileo first pointed his telescope at it in the year 1610. It’s not just the Saturn’s enormous rings that sets it apart, there is another wonder world which is gravitationally bound to this giant planet which is it’s mighty moon ‘Titan’. Named after the ancient Greek deities that according to mythology ruled the world before Zeus and his Olympians defeated them.

‘Titan’ is the second largest moon in the solar system, it is roughly 3200 miles or 5150 kilometres in diameter making it slightly bigger than the planet Mercury. ‘Titan’ is frequently described as a planet like moon because of it’s significant atmosphere. The atmosphere is mostly made up of nitrogen and methane. This thick blanket of orange colored haze extends out to an altitude of around 370 miles or 595 kilometres above the moon’s cold barren surface obscuring our view of of what lies beneath. 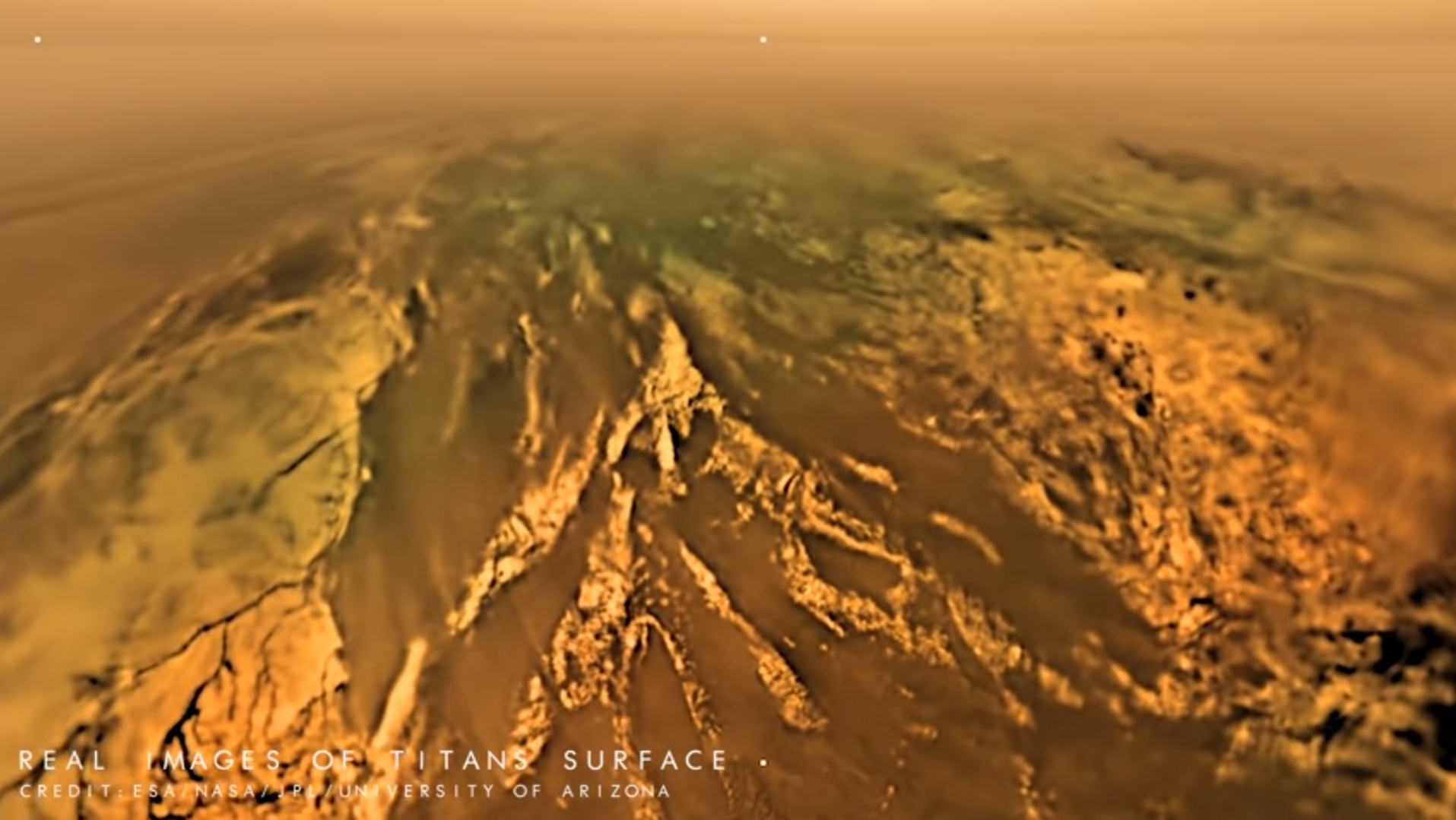 However back in January 2005, Titan’s strange landscape was finally revealed to us when the European Space Agency’s Huygens probe detached from the famous Cassini spacecraft. The probe parachuted through Titan’s atmosphere while capturing incredible images of it’s extra terrestrial surface.

The Cassini spacecraft was also able to penetrate the thick haze from above by using it’s mapping radar instrument which revealed the existence of enormous lakes filled not with water but flowing liquid methane. After 127 close flybys for over 13 years,  Cassini mapped almost all of Titan’s surface which allowed scientists to see below the clouds and survey it’s complex terrain in unprecedented detail.

The surface of ‘Titan’ is one of the most Earth-like places in the solar system, yet it is completely inhospitable for a life as we know it. Here the temperature drops to a frigid -179 degrees Celsius which is -290 degrees Fahrenheit. It is so cold that the water would freeze harder than rock. Because Titan is shrouded in a dense smoke-like atmosphere, standing on this moon would feel like we are under 50 feet or 15 meters of water as the atmospheric pressure is 60% greater than here on Earth.

The ‘Titan’ landscape is very flat, lacking many craters. However vast regions on dunes can be seen spread across the moon. But these towering dunes are not composed of sand, instead they are made up of tiny grains of dark hydrocarbons. This strange terrain has also been sculpted by liquid methane and ethane which has carved drainage channels out of the moon’s frozen surface as it flows into large seas and lakes.

Studies have suggested that the bizarre reservoirs can even be as deep as 525 feet or 160 meters and are thought to fill up when Titan’s clouds drench the surface in methane rain. It is even a possibility that Titan is the only other object within the solar system where we can experience magnificent rainbow. No other known world apart from Earth has this kind of liquid activity on it’s surface making Titan an extremely rare moon.

Although there is currently no evidence for life on Titan, it has been suggested that the vast pools of liquid methane and ethane could serve as a habitable environment providing a home for alien organisms unlike anything that can be found here on Earth.