It’s been 4 years since Cassini ended its mission by diving into the atmosphere of Saturn. Its mission was tremendously successful, and it was one of the greatest missions of all time. The data it collected over the 13 years in orbit around Saturn is still being poured over today, as there are still a lot of unsolved mysteries about Saturn and its moons. 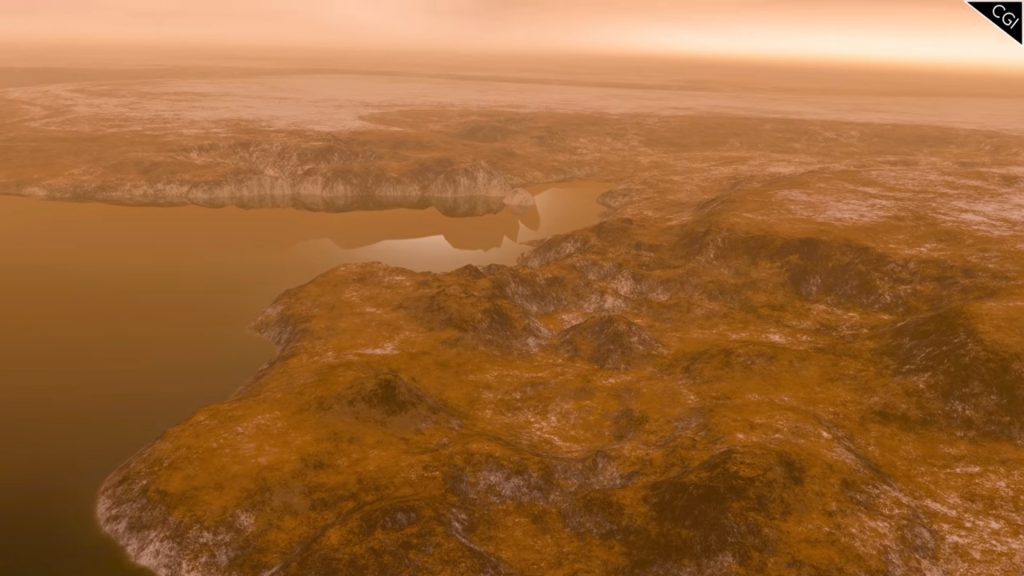 One of the most impressive discoveries of Cassini was confirming the existence of liquid methane lakes on the solar system’s most unusual moon, Titan. But knowing they are there didn’t help answer how they came into being. But now, scientists may have come up with the answer.

There are only two places in the solar system that have stable bodies of liquid on their surfaces, Earth and Titan. That doesn’t mean they are very similar places though. Earth is a rocky planet, with an iron core and silicate mantle. Titan is an icy world, its crust and mantle are made up of mainly water ice, with a subsurface ocean of water surrounding a rocky core. This means Earth is much denser and coupled with its bigger size means the gravity on Earth is a lot stronger than on Titan.

Both worlds have dense atmospheres, but due to their differences in gravity, Earth’s atmosphere hugs the planet tightly, while Titan’s, although a little more massive in total than Earth’s, stretches 100s of kms above the moon’s surface. Their compositions are also different. Earth is much closer to the Sun, meaning it is much warmer than Titan, which allows there to be an active water cycle. Water is frozen solid on Titan; however, the temperature is just right for liquid methane to be present on its surface. That means, yes, Titan experiences a methane cycle in a similar fashion to Earth’s water cycle. 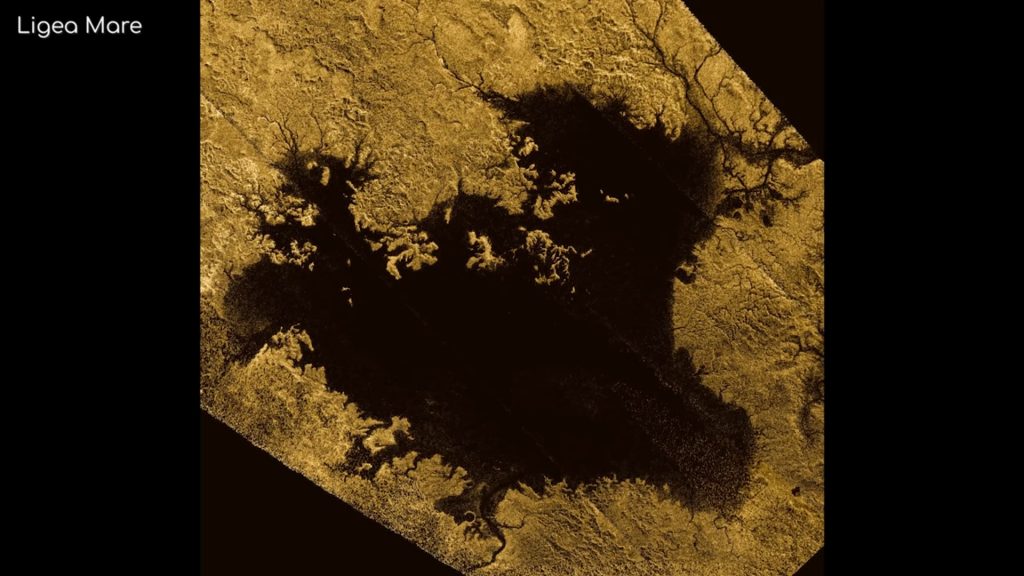 Methane clouds have been spotted in Titan’s atmosphere, and these clouds rain liquid methane onto Titan’s frigid surface. This process carves out rivers through the surface ices that flow into small seas or lakes. Radar data from Cassini, clearly show various riverbeds and valleys cut away by the flowing methane. The most prominent of these flow channels are found around Titan’s second largest lake, Ligea Mare. These channels, dubbed Vid Flumina, are special because they look to be much older than any other flow channel on the moon. 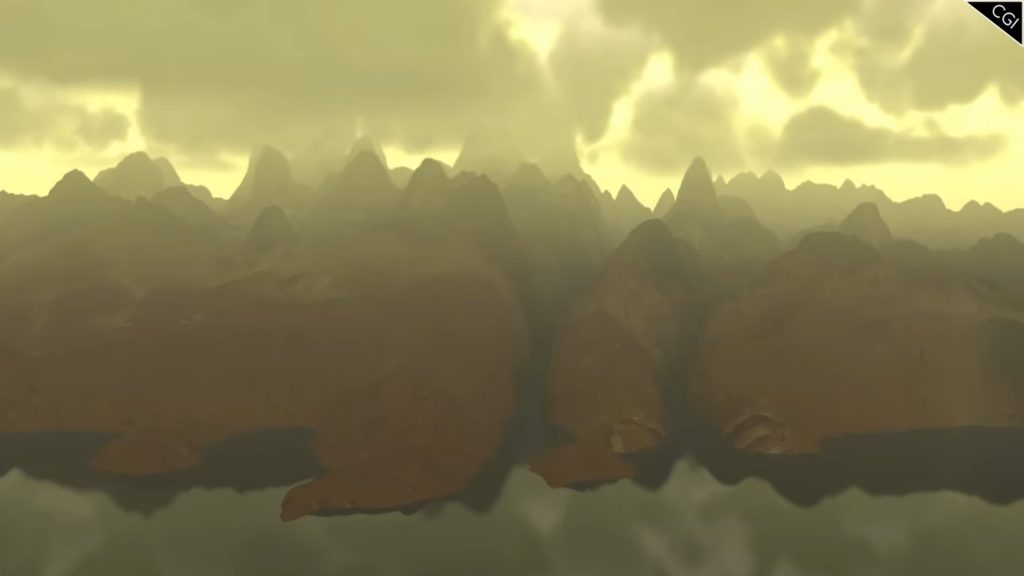 The canyons have walls hundreds of meters tall with very steep slopes. Liquid methane is visible in the canyon, but right now it isn’t flowing, rather it is likely to be a drowned river valley due to the level of Ligeia Mare, although some higher altitude tributaries are likely to still be flowing down into the canyon. The lakes on Titan can be huge, the biggest one is the Kraken Mare. It is even bigger than the Caspian Sea on Earth at roughly 400,000 km². 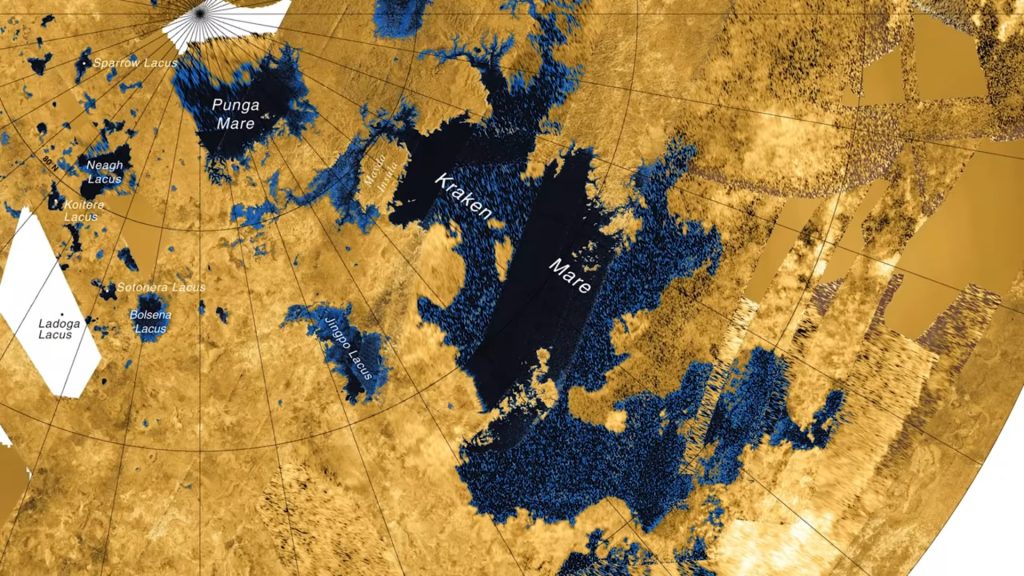 The radar data suggests that a lot of these lakes are very shallow, some of them only a few meters deep. Some of the larger ones, however, can have depths of over 200 meters. All in all, this puts the total amount of potential fossil fuels on Titan to over 300 times the proven amount on Earth. The lakes of Titan are surprisingly still.

Some lakes do not have ripples larger than about 1 mm, meaning it would appear like glass or a mirror. This came as a surprise to scientists, who expected waves of up to a meter in height due to the low gravity and dense atmosphere blowing over the surface. This could mean that there just so happened to not be any wind as Cassini passed over, the lakes are a lot more viscous than expected, or that they occasionally freeze over.  One other theory has recently been proposed, and that is that dense aerosols may sit on the lake’s surfaces, creating a film which prevents waves from forming.

The detection of lakes on Titan wouldn’t be possible without the aid of Cassini’s radar instrument and infrared camera to see through Titan’s thick haze. These instruments use a process called specular reflection to make observations. The radar instrument detected large dark patches across the surface, which were later confirmed to be lakes by the infrared camera, when sunlight reflected off the lake and into Cassini’s view, a bit like what you sometimes see of Earth from space.

Specular reflection with the infrared camera and the Sun ended up being used a lot to confirm what the radar secular reflection was seeing. Interestingly, clouds and the subsequent effects of their rain were also detected. 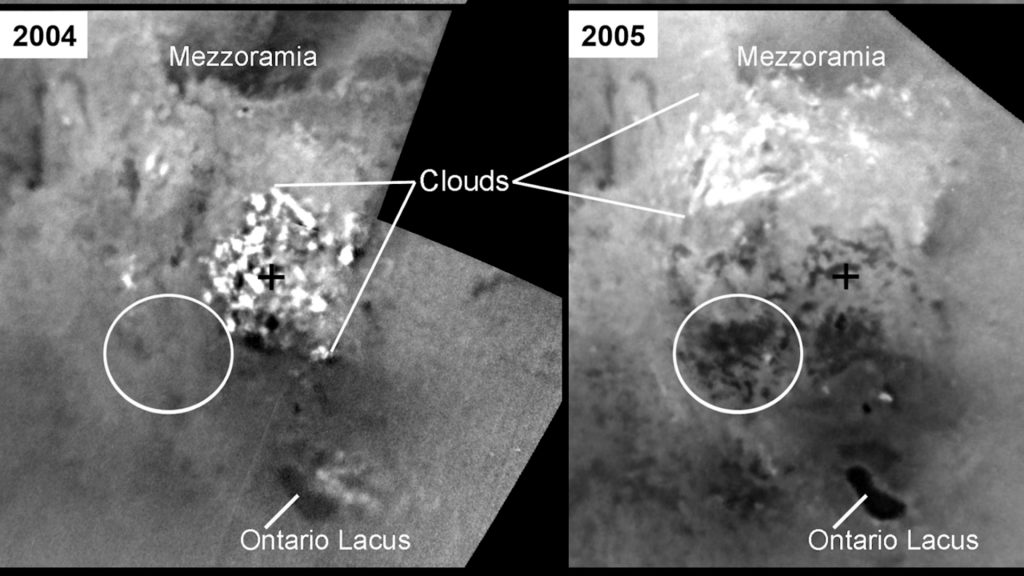 In the left image above you see a light patch, indicating dry ground, but a year later the area was imaged again and this time darker patches can be seen, indicating a very flat surface, highly likely to be shallow and small lakes.

The lakes aren’t distributed evenly across the moon, rather most of them are found near the poles. However, the Huygens probe which was part of the Cassini mission and landed on Titan’s surface near the equator did see flow channels around the equator too. But where are the lakes these channels would flow into? Well this is thought to be the result of seasonal variations, like summer and winter producing different types of weather on Earth.

At certain points in Titan’s year, rain would fall in these parts and pool on the surface, however, these probably evaporate during the rest of the year and the rain migrates to the north and south, which is what Cassini and Huygens would have observed. Even though Cassini was in orbit around Saturn for 13 years, that’s not even one half of a Saturnian year. Saturn takes a full 30 Earth years to orbit the Sun once, so Cassini didn’t capture a complete picture of all the seasonal variations.

The lakes likely vary in depth throughout the year, with some potentially drying up completely. There is one other mystery that was thrown up by the Cassini data to do with Titan’s lakes that may have recently been solved. Some of Titan’s smaller lakes have very steep rims that tower above the lake level. This is unusual as lakes on Earth typically form from erosion processes and dissolving limestone, meaning the rims are shallow and smooth. These are called Karstic lakes.

But this process doesn’t add up for a number of Titan’s lakes. Scientists now believe that these could be explosion craters that have since filled up with liquid methane. Models suggest that Titan was once colder, with nitrogen rain and snow instead of methane. This liquid nitrogen would have seeped into the crust creating pockets of liquid nitrogen. As the greenhouse gas methane was pumped into the atmosphere by cryovolcanoes in Titan’s past, the world warmed, which would have caused the liquid nitrogen now trapped under the surface to evaporate and expand, building the pressure in the pocket until the lid basically blew off, leaving an explosion crater.

There is still a lot to be learned from the Cassini data. The lakes of Titan were just a small aspect of the mission, and scientists are going to be piecing these puzzles together for years to come, better understanding the Saturn system as a whole. I really hope future space agency missions will be as ambitious and as successful as the Cassini mission. There is still an awful lot to discover out there.