Betelgeuse, the famous red supergiant star that has gained a lot of attention over the year ever since it was discovered that it will one day explode in a spectacular event known as a  supernova. This powerful spectacle would light up the nights sky for weeks, possibly months and may  even be visible during the day. But when will this magnificent celestial light show occur? Well, scientists predict it will happen anytime between right now, and 100 thousand years.

The moment a Supernova occurs is very difficult to predict as this lengthy time scale indicates, but it’s not just Betelgeuse that is expected to explode. Other stars, within 1000 light-years of our sun are also on the verge of going supernova within a certain time scale. So let’s take a look at some of the closest candidates that according to scientists are at the latter stages of their stellar lives and that one day will explode in a magnificent supernova. These explosions will provide the humans of that time with a spectacular light show visible with just the naked eye.

In our galaxy, the Milky Way, which contains billions of stars, it is estimated that a supernova occurs every 50 to 100 years, however, those that are visible with just the naked eye are exceedingly rare. The most recent supernova to be seen in the Milky Way with just the naked eye was in 1604 and was named, Kepler’s supernova, after the famous Johannes Kepler, who made detailed observations of the natural phenomenon for more than a year. 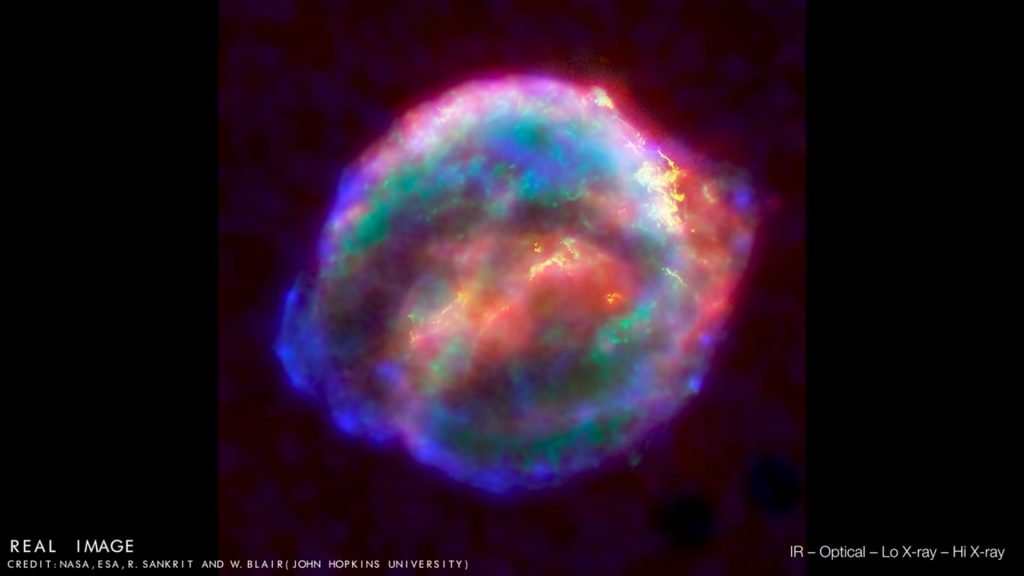 Above is an image of the remnant of that exact event that was seen around the globe over 400 years ago. Within the universe, supernovae are not rare, because there are billions of galaxies, containing billions of stars and so it has estimated that dozens of these stars are exploding every second, occasionally even allowing scientists to study them as they occur.

One such example is the supernova that occurred in 1987 from within a satellite Galaxy, named the Large Magellanic Cloud. This event blazed with the power of 100 million suns for several months following its discovery and has provided an incredible insight into the last stages of stellar evolution.

Although Betelgeuse is a likely candidate for a naked eye supernova event within the Milky Way, many other stars are also expected to explode within the next few million years or so, creating a powerful flash that someday will light up our night’s sky in a dazzling celestial show that exposes the final moments of a star’s existence.

1. Rigel is a supergiant star that can be easily seen in the night’s sky as a bluey-white colour, located at the bottom of the Orion hunters leg. It is much hotter than the sun, producing about 120,000 times more energy. Hidden within its bright glare are two smaller companion stars that can only be seen using a powerful telescope.

Rigel is in the latter stages of its stellar life, even though it is only estimated to be seven to nine million years old and someday, within the next few million years or so, it will light up the night sky, before disappearing from one of our most recognisable constellations forever.

2. The second closest supernova candidate is Antares, a supergiant that can be seen shining boldly as the brightest star within the fishhook pattern of the Scorpius constellation. Distinctly red in colour when viewed with the naked eye, this star is so enormous that if it was placed at the centre of the solar system it would reach somewhere between the orbits of Mars and Jupiter, swallowing all the inner rocky planets.

Antares is also a part of a binary system, the primary star being the red supergiant and its companion Antares B, being a smaller main-sequence star. At a young age of only 11 million years old, it is expected that, like Betelguese, Antares will almost certainly explode as a supernova within the next 100 thousand years, although theoretically, it could happen even tomorrow.

3. In third position is Alpha Lupi, a blue giant star that is located in the constellation of Lupus, which means Wolf in Latin. As the brightest star in this constellation, Alpha Lupi can be seen marking the Wolf’s rear paw and once again, is a binary star system. It is the oldest star in this list, estimated to be between 16-20 million years old, but even at this age and at 11 times the mass of the sun, this star is not on its way out just yet. Because it is still expected by scientists to grow brighter and bigger before exploding within a few million years or so.

4. In fourth position are the blue giant twins, Spica, the brightest star in the constellation of Virgo. It can be found by following the big dippers handle in an arc motion to the star Arcturus, before dropping directly down to Spica. Again this is a binary system, although its companion star is extremely close, causing gravitational forces to pull them into an egg shape, rather than keeping them spherical. At only 12.5 million years old, Spica has been calculated to have only just entered the final stages of its life. At a mass of over 10 times that of the sun, it is expected to go supernova within the next few million years.

5. Taking another spot of the closest naked-eye supernova is IK Pegasi. This strange binary star system can be located at the edge of the constellation of Pegasus and the reason it is strange is because the primary star, named IK Pegasi A is a main-sequence star, much like the sun, while its companion is a small, dense white dwarf, a remnant of an ancient star. This partnership means that when IK Pegasi A evolves into a red giant towards the end of its life cycle, the white dwarf, named IK Pegasi B will begin to consume its partner as it expands.

When the white dwarf has accumulated enough mass from the red giant, it might collapse in on itself and explode as a rare type of supernova. However, it is thought that if this does occur, it will take millions of years before we get to see the final show. A show that future humans will hopefully get to enjoy.