What Lies Inside Of Planet Jupiter?

Jupiter is the king of the planets in our solar system, a colossal world that scientists believe can help us better understand the origin of the solar system. Observed as a wandering star by ancient civilizations, it took until the year 1610, before Jupiter could be seen in detail when Galileo first peered through a small telescope and discovered the gas giant’s largest moons. 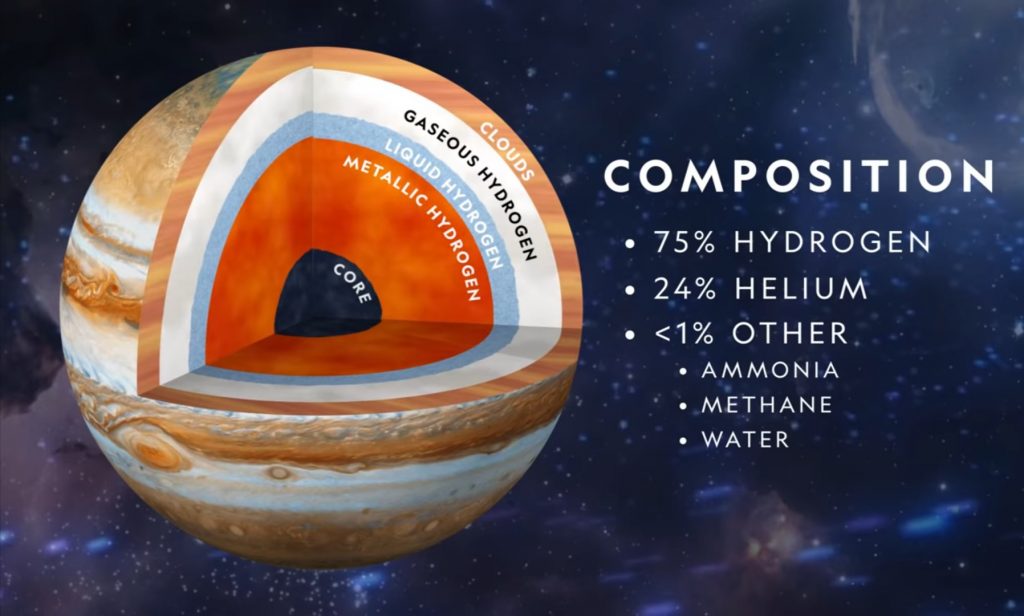 In more recent times, and continuing Galileo’s legacy, nine robotic spacecraft have visited the gas planet, two of which entered into orbit, allowing us to study its complex, dramatic atmosphere like never before. Because of these ambitious missions, scientists have made huge strides forward in understanding the colossal world that little bit more. But Jupiter still holds many mysteries, such as, what lies below its magnificent tapestry of colourful, swirling clouds? And to dive even deeper, what is at its core?

Because Jupiter is so big, scientists know it has been massively influential in the story of the solar system. So, in order to fully understand our own planet, we must first understand how the king of the planets formed. To do this, NASA launched Juno, a spacecraft that successfully entered into orbit around Jupiter in July 2016 and was the first to study the gas giants mysterious, cloud-covered interior, among many other things. 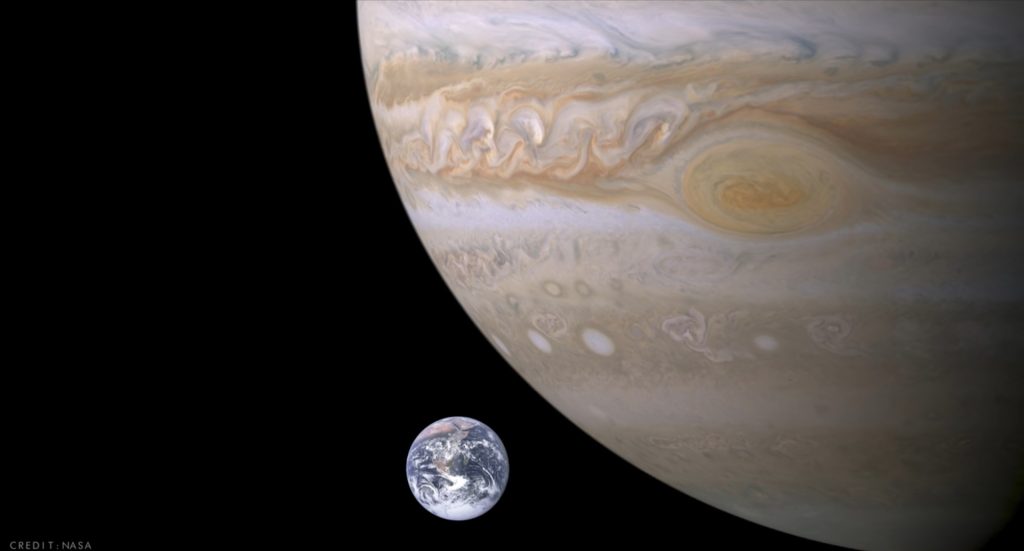 The entire planet is unimaginably large, if Earth was the size of a grape for example, then Jupiter would be about the size of a basketball. Inside of Jupiter, the deeper the atmosphere falls, the tighter it is squeezed together, Increase in pressure and temperature occurs as it gets closer to the core. Jupiter has everything you need to create a truly bizarre environment.

Its interior can also be divided into layers, however, the transition between each layer is extremely gradual, and the distances between each transition are enormous. The outer part of the planet or the familiar stripes and swirls that make Jupiter so recognisable are cold, thick, clouds of ammonia and water floating in a translucent atmosphere of hydrogen and helium. These dense clouds obscure the inside of Jupiter and conceal its true structure, but Juno was equipped with a powerful payload of scientific instruments that measured and probed the planet, helping scientists understand what is going on inside. 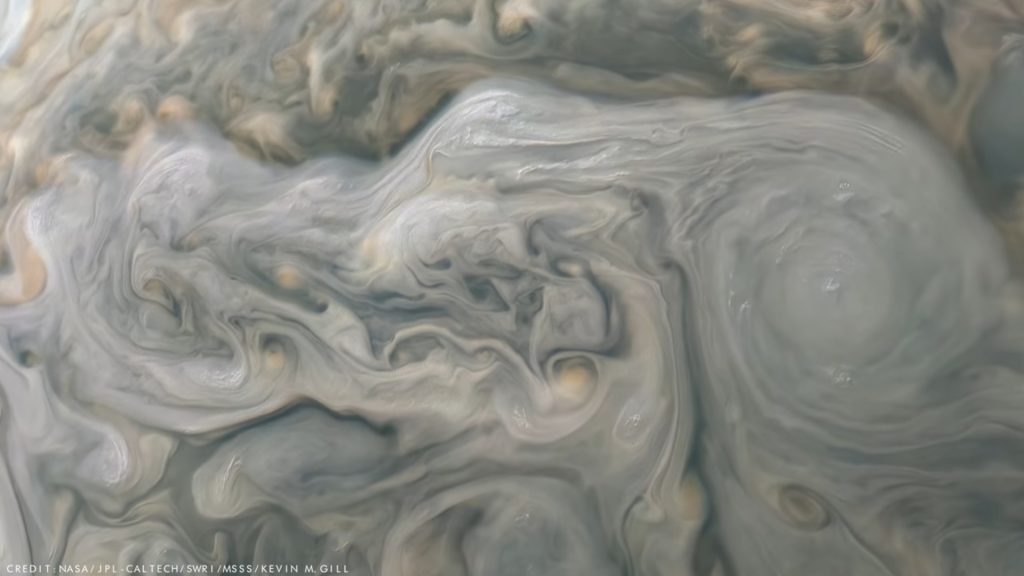 Beneath the thick, chaotic cloudy atmosphere, which extends down for hundreds of miles, the pressure and temperature gradually builds until the hydrogen gas that dominates most of the atmosphere, slowly compresses into a liquid, creating the largest ocean in the solar system. But remember, this is not an ocean of flowing water, but instead an ocean of hydrogen.

On Earth, elements exist in one of three common states, solid, liquid and gas and the form of an element depends on external factors such as pressure and temperature. Hydrogen gas on Earth can be artificially compressed and cooled to become a liquid, but inside of Jupiter, this process happens naturally, under immense pressures, possibly 500,000 times the pressure at sea level on Earth and under extreme temperatures, possibly 1700 degrees Celsius or 3100 degrees Fahrenheit.

You could imagine it being like sinking through increasing heavy fog that becomes wetter and wetter the further you sink until you find yourself eventually swimming in a liquid. Jupiter’s enormous ocean becomes even more bizarre the deeper it falls because at depths of perhaps halfway towards the center of the planet, the liquid hydrogen starts to act more like liquid metal.

This extraordinary phenomenon is caused by the ever-increasing pressure, which at this depth is millions of times the atmospheric pressure at sea level on Earth, squeezing the liquid hydrogen atoms so tightly, their electrons break free. These free electrons can then flow throughout the liquid, generating an electrical current, which along with a fast rotation which possibly explains why Jupiter has such a powerful magnetic field.

Under this immense pressure, the temperature also soars, hitting a scorching 10,000 degrees Celsius or 18,000 degrees Fahrenheit. Called liquid metallic hydrogen, this strange ocean likely fills most of Jupiter’s interior, firmly encasing its mysterious core. A core that exists under an estimated 100 million times the atmospheric pressure at sea level on Earth. 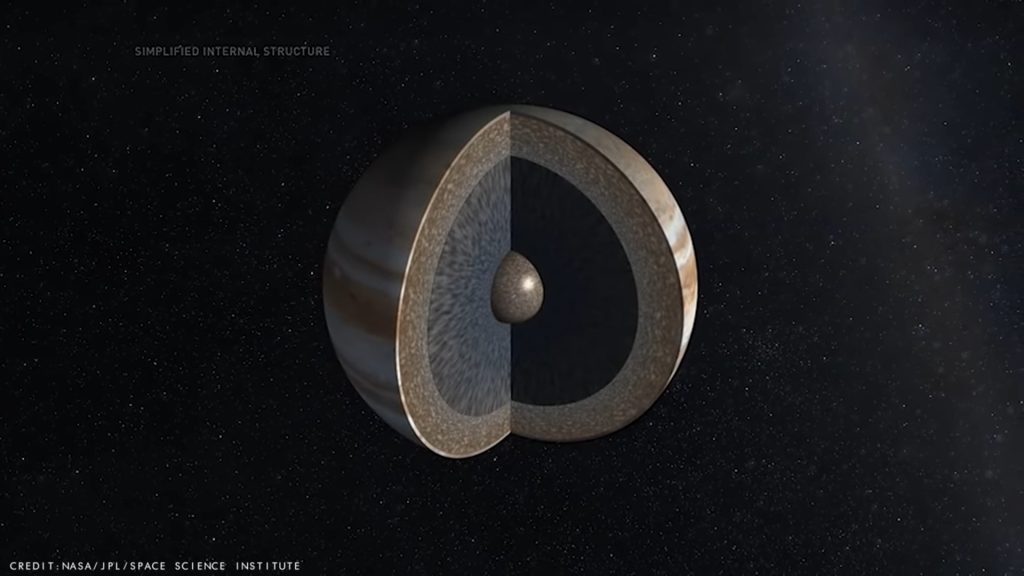 After years of measuring and probing Jupiter, Juno discovered something surprising about the gas giants core, something that was unexpected, Jupiter’s core is fuzzy. Before Juno’s groundbreaking data was sent back to Earth, scientists thought that at the center would be a compact, dense object about the size of Earth, that is made up of heavy elements, such as silicate rock and iron.

Gas giants are thought to originally form as rocky or icy bodies that accumulate their thick atmospheres over time, and this still may be the case for Jupiter. But Juno found that Its core is diluted or diffuse, without sharp boundaries and mixed into the liquid metallic hydrogen that surrounds it. This fuzzy core suggests that Jupiter had a large head-on impact with another planet early on in its history when the solar system was a young and violent place billions of years ago.

Computer simulations show scientists that a collision with a rocky protoplanet about 10 times the size of Earth, with a dense core rich in heavy elements, could have created enough energy to scatter and dilute Jupiter’s core for billions of years. However, scientists do not know enough about Saturn, Uranus or Neptune’s interiors yet to say whether Jupiter’s core is unusual or whether this giant impact theory is correct.

Below Jupiter’s magnificent clouds, it is clear, that an unimaginably strange environment exists, an environment that is scorching, violent and crushing, and is tightly holding on to a secret that is still baffling scientists today. For now, Jupiter’s bizarre core will have to stay a mystery, but a mystery that is slowly being solved.