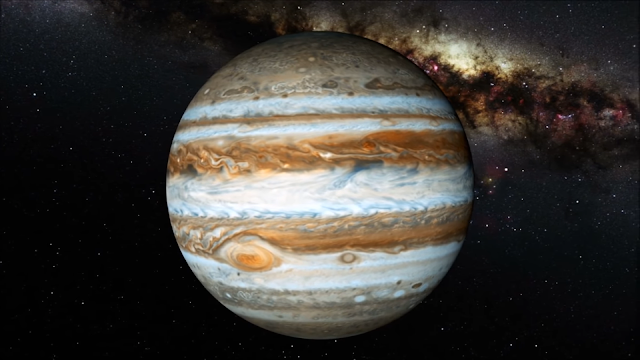 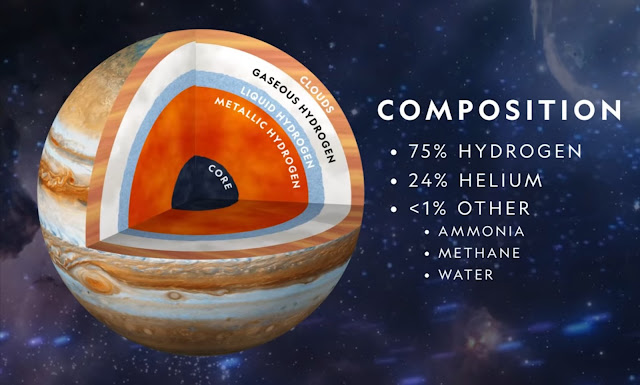 ‘Jupiter’ is called a Gas Giant because it is so large and is made mostly of gases which are mainly Hydrogen, Helium, Methane and Ammonia. Jupiter is made of many of the same materials as stars, in fact if it had been 80 times more massive than what it is, it might have become a star instead of a planet.

‘Jupiter’ is so massive that it would take more than 300 Earths to equal Jupiter’s mass, it is twice as massive as all of the other planets in the Solar System put together and has a diameter of more than 88000 miles or 142000 kilometers. Jupiter is so large that if it were a big jar, more than 1300 Earths could fit inside of it. This planet has been observed for thousands of years and was known to the ancient Romans who named it after Jupiter the king of the Gods.

‘Jupiter’ is the third brightest object in the night sky dimmer only than the moon and Venus. ‘Jupiter’ is so far from the Sun that it takes almost 12 Earth years to orbit around the Sun. Although Jupiter’s orbit is much longer than the Earth’s it’s day is much shorter, the Earth rotates once every 24 hours whereas Jupiter takes just 9 hours to rotate about it’s axis which is faster than any other planet in the Solar System. Spinning so quickly causes strong weather patterns in the clouds surrounding the planet and this makes Jupiter the stormiest planet in the Solar System.

The Great Red Spot is huge, in fact it is larger than the Earth, however recent observations have shown that the Great Red Spot is shrinking and is currently at the smallest size it has ever been observed. Temperatures in Jupiter’s clouds are far below freezing which are negative 234 degrees fahrenheit or negative 145 degrees celsius, but near the center it is much hotter. Core temperatures on Jupiter may reach 43000 degrees fahrenheit or 24000 degrees celsius which is hotter than the surface of the Sun.

Jupiter has at least 67 moons out of which 55 are very small, only few miles or kilometers wide, the four largest moons of Jupiter are Io, Europa, Ganymede and Callisto and are large enough to be seen from the Earth using telescope. These four moons were discovered by the Italian astronomer Galileo Galilei about 400 years ago. Ganymede is not only the largest moon of Jupiter but is the largest moon in the entire Solar System as well, in fact Ganymede is even larger than the planet Mercury. Jupiter has a system of thin rings around it, although these rings are much smaller than the rings of Saturn, these rings are made mostly of tiny dust particles and they are so thin and so hard to see that no one knew they were there until NASA’s Voyager-1 probe approached Jupiter in 1979. Total of 8 spacecrafts have either passed or visited Jupiter since 1973, on August 5th 2011 NASA launched a 9th spacecraft called Juno to further study the planet and this spacecraft is currently orbiting the giant planet sending valuable information back to Earth.