What Lies Inside Of Planet Neptune? 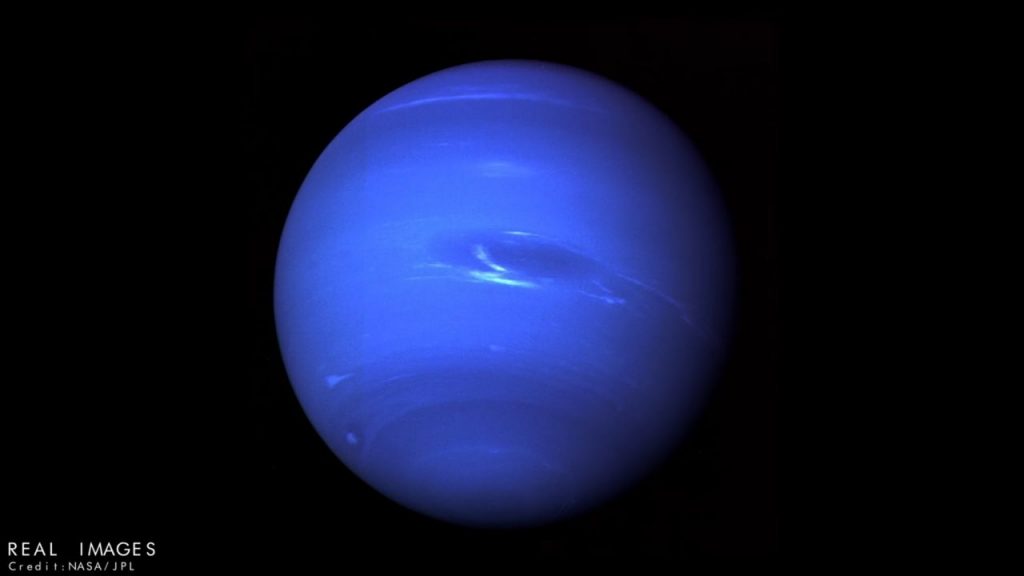 Neptune is our solar system’s most distant planet, it is a mysterious ice giant far beyond Jupiter, Saturn, and Uranus and a world that has only ever been visited once. Neptune was the first planet in history to be discovered using only mathematics, when French astronomer Urbain Le Verrier mathematically predicted that a large undiscovered planet was lurking beyond the orbit of Uranus, figuring out not only where it was located, but also how much mass it had.

In 1846, the 8th planet from Sun was predicted, then observed and confirmed. On average Neptune is 2.8 billion miles away, which is 4.5 billion kilometers away, making it far too faint to be seen with just the naked eye from Earth. Throughout the years, telescopes have improved to the point where Neptune is no longer just a blue dot, now we can observe the distant ice giant in almost all of its glory.

More than five decades ago a famous spacecraft was launched, that gave us the greatest view of the planet achieved so far. In August 1977 Voyager-2 began its grand tour of the solar system, becoming the only spacecraft to visit all four of the outer planets. It arrived at Neptune in 1989, 12 years after its journey began and captured the mysterious ice giant like never before.

It revealed a world wrapped in teal and cobalt blue bands of clouds, like a blue-hued sibling of Jupiter. A massive slate-coloured storm was discovered to be raging through its atmosphere, later being dubbed the “Great Dark  Spot”. Four previously unknown rings were also spotted, along with six new moons. By using the information beamed back by Voyager-2, along with what has been discovered using telescopes such as Hubble and what we already know about other similar giant planets, such as Jupiter and Saturn, which have been visited many times over the years, scientists have been able to gain a good understanding of what is going on below the clouds of this dark, distant ice giant.

Although, Neptune does still represents one of the least explored worlds in our solar system, and so it continues to hold on to many of its mysteries. Inside of this enormous world, which is about four times wider than Earth, the deeper the atmosphere falls, the tighter it is squeezed together, increasing in pressure and temperature the closer it gets to the core,  creating an unimaginable hellish environment. 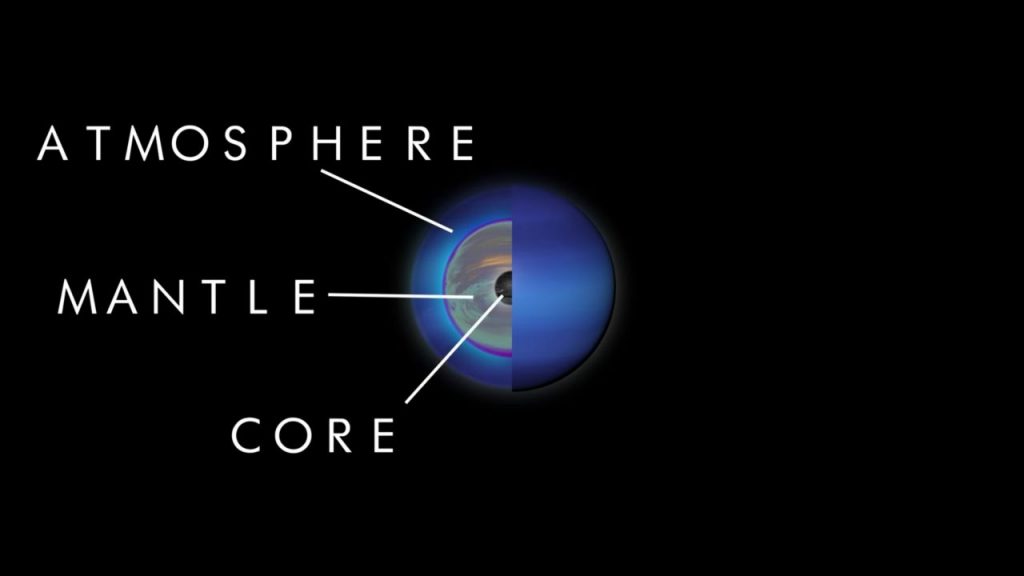 The interior can be divided into various layers, the atmosphere, the mantle and the core. Although the distances between each layer are extremely gradual and the distances between each transition are enormous. The outer layer of the planet, the part that we can observe is Neptune’s thick atmosphere which is mostly made up of hydrogen and helium, with trace amounts of methane.

Although, It is the methane that gives Neptune its rich cobalt blue hue, as it absorbs red light and reflects the blue light back into space. Uranus’s atmosphere is blue for the same reason, but scientists are unsure why Neptune is so much more vivid, suggesting that some mysterious atmospheric chemistry is causing the more intense colour.

It is bitterly cold within Neptune’s atmosphere, at -214 degrees Celsius, which is -353 degrees Fahrenheit. Yet, this is much warmer than expected, considering how far away it is from the sun, confirming that Neptune must have an internal energy source like its neighboring giant planets.

Within the layer of chaotic, rotating gas clouds of Neptune, the solar system’s fastest winds have also been recorded. Blisteringly cold clouds that are moving five times faster than the strongest winds ever recorded here on Earth. In fact, they are so powerful they break the sound barrier. These thick, violent clouds obscure and conceal the internal structure of Neptune, extending perhaps 10 to 20% of the way down, towards its core.

As the atmosphere falls deeper and deeper, it increases in pressure and temperature, gradually becoming hotter and denser, until eventually, scientists think it compresses into one of the strangest oceans in the solar system. This bizarre, thick ocean does not have a boundary, like the bodies of water found here on Earth, instead, it slowly merges from a gas into a type of liquid. You could imagine it like sinking through the increasingly heavy fog that becomes wetter and wetter the further you sink, until you eventually find yourself swimming in a seemingly bottomless pool of liquid.

This enormous, slushy ocean is the planet’s mantle, a strange layer of fluid behaving material that is made up of highly pressured water, methane and ammonia ices. However, this is not the type of ocean we are familiar with, because within this dark region the temperatures would reach thousands of degrees. On Earth, elements exist in one of three states, solid, liquid and gas, but the form of an element depends on its external factors, such as pressure and temperature.

Deep within the mantle of Neptune, these factors are so extreme that the water, methane and ammonia ices that make up the ocean behave like an extremely hot, dense fluid. It is under these unimaginable bizarre conditions that the superheated ocean is kept from boiling away, locking it deep below Neptune’s thick, chaotic clouds. This deep, scorching layer is believed to be what drives the strong winds we can observe within the stormy atmosphere above, and may also be where Neptune’s mysteriously strong, lopsided magnetic field is generated.

Within this intense region, methane molecules might break apart and carbon atoms may condense into crystals of diamond that rain down through the mantle like hailstones. Very high-pressure experiments completed in the lab also suggest that at the base of this mantle, a layer of liquid carbon may exist with floating solid chunks of diamond or so-called diamond bergs. A swirling internal ocean of diamonds could also deflect or tilt Neptune’s magnetic field,  possibly explaining the long standing mystery of why its magnetic poles are so lopsided.

At the center of Neptune, far below the violent, twisting atmosphere, the electrically conducting, super hot ocean and the possible layer of flowing diamond, there is a core, but unlike Jupiter, which seems to have a diluted or fuzzy core, astronomers believe that Neptune’s is probably solid. This object is likely about one and a  half times the size of Earth and could be composed of water ice and silicate rock, all crushed below a planets worth of materials.

When Voyager-2 passed by Neptune all those years ago, it showed us a fascinating planet that demanded further investigation. Unfortunately, Voyager-2 was the last and currently only spacecraft to visit this bizarre world and so it still holds many mysteries. Fortunately, the James Webb space telescope will be launching soon and although it won’t travel to Neptune, it will have the capabilities to unlock some of its secrets and provide us with a new view of how this distant ice giant works, especially within its atmosphere. So although scientists do have a good idea of what is going on below the clouds of Neptune, there is still a lot more to discover, before we can fully understand this unimaginably strange environment.