How Having Two Suns Would Affect Human Life? 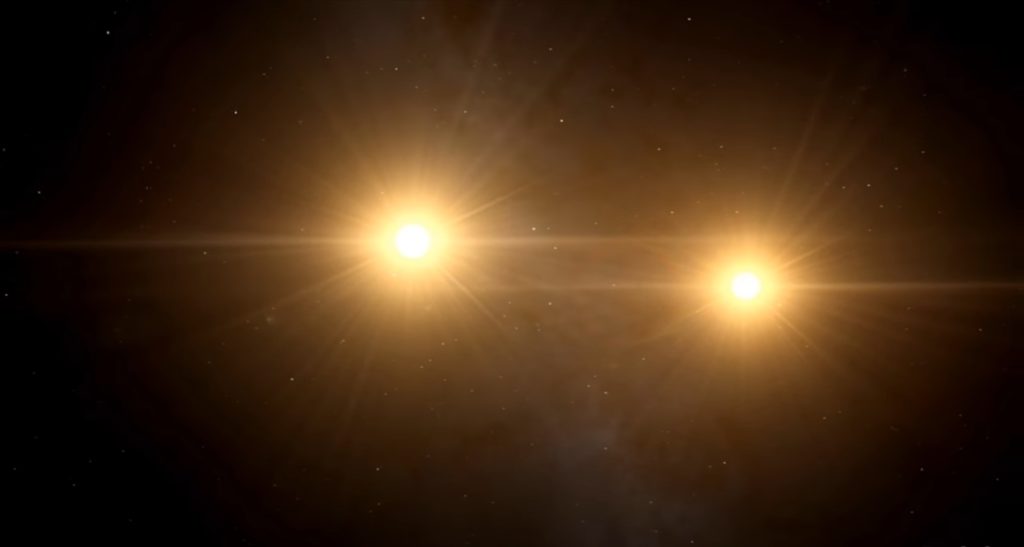 Have you ever wondered what it would be like to have two Suns in our sky? Seeing two suns during a sunset would be a spectacular sight indeed. Actually, having two stars isn’t such a rare occurrence. It is currently estimated that a third of star systems have two or more stars. Which made us wonder, how much would it impact us having second star in the sky? How hot would Earth get? What would the day and night cycle be like? Would it be possible for life as we know it to survive in a multi-star system? Well, it depends.

Let’s we keep our Sun as it is, and only make the second star the variable in this thought experiment. As we know, stars come in all sizes, from small, cool and dim red dwarves, all the way up to large, hot and bright blue supergiants. In a binary star system, the stars orbit around the system’s barycentre, or centre of mass. Depending on the mass of the stars and the distances between them, you’ll have differences in how these orbits look.

For similarly sized stars, the orbit could look circular in nature, or in an ellipse. On the other hand, the bigger discrepancy there is between the star’s masses, the closer the barycentre will be to the more massive star. Let’s say we plonk a red dwarf, which is the smallest star type, in a close orbit around our Sun. Even though a red dwarf can be as little as 7.5% the mass of our Sun, it’s already going to have a big impact on us.

From our perspective, the star would look like it orbits the Sun, meaning there would be times when it transits in front of the Sun, and other times where it is eclipsed by the Sun. Our year would be shorter if we stay 1 AU from the system’s barycentre. Because of the increase in mass and gravity of the system from the extra star, Earth’s velocity would have to be faster in order to not be pulled into the stars. Either that or its orbit would have to be slightly further out if we wanted to maintain our current velocity.

The increase in temperature from the star would be noticeable too, definitely making it unbearable for humans, but exactly how hot would depend on a variety of factors, like a runaway greenhouse effect, the heat of the star, and more. But let’s say we place Earth’s orbit in such a location that we can survive. Seasons would still be massively impacted, as the tilt of the planet would be secondary to the distance to the second star.

When the second star is as far away as possible, and a hemisphere on Earth was also experiencing winter, it would get extremely cold. On the other hand, combine a summer with the second star passing as closely as possible, and it will be incredibly hot. Additionally, a curious phenomenon with red dwarves is that they also produce huge flares, much larger than the ones our Sun produces. They would easily knock satellites offline on a regular basis, and Earth would have some spectacular aurora.

Our power grid as it stands would also be under serious threat from these stellar flares, as they would act like hemisphere wide EMP bombs. The interactions with this second star could well make our Sun more active too, meaning it too may produce more flares. So even with the smallest type of star, our habitability on Earth would be under serious threat.

Increase the mass of the second star, and you’ll start to get additional problems, like increased UV radiation, making going outside more and more dangerous. You’ll also have two shadows a lot of the time. Once you turn the second star into something like a blue supergiant, there really won’t be a place in the system were there is even a hope of habitability.

Blue supergiants can be many times the mass of our Sun, the theoretical limit being 150 solar masses. Their volume is also big, they make the Sun look absolutely puny in comparison. They can be millions of times more luminous than our Sun too, with devastating stellar winds, enough to rip our atmosphere off over a relatively short time frame. Larger again are yellow supergiants, and then red supergiants. While not as massive or as luminous as blue supergiants, red supergiants are the biggest stars in existence.

If you plopped the largest known of these stars directly into the centre of our solar system, not only would they easily encompass Earth, but it would encompass everything up until Saturn. That’s 10 billion times the volume of our Sun. However, there is a scenario where we could be in a binary star system with a supergiant and still be on a habitable planet. You see, binary stars can orbit very far apart, taking thousands of years to complete one orbit.

The most extreme cases can see a binary star system with a separation of over a light year. And what can happen is that planetary systems will form around each of these stars separately, meaning that if Earth was in one of these planetary systems, it would only have the one parent star even if that star was part of a binary. The second star would be easily visible in the night sky but may not make much of an impact during the day, depending on its luminosity. Stellar winds from the other star would have little impact on Earth, as our Sun’s powerful magnetic field would redirect most of it away.

The big problem with a supergiant on your doorstep is that it is a ticking timebomb, supergiants tend to be on the verge of erupting in a supernova. A supernova going off only one light year away would be catastrophic, probably sterilising the entire planet as radiation from the shockwave passes over. And that’s not to mention the gamma ray bursts from the resulting neutron star. In fact, a recent study has suggested that being within 50 light years of a supernova going off would be close enough to be catastrophic in nature, however the good news is that we don’t know of a star capable of erupting in a supernova within 100 light years.

Going back to the single parent star binary star configuration, there’s one more problem. On Earth with a single sun, we have a set day and night cycle. However, should we have a second sun outside of our orbit but still pretty close to us, it’s going to mess with our day and night cycle pretty badly. There would only be tiny parts of the year where you would get a proper day and night cycle, and as the year progresses, you’d get less and less of a night until one point where you’d have no night at all.

So, there we have it! While having a second sun during a sunset seems like it could be an amazing prospect at first glance, delving into the details reveals that we are extremely lucky to only have the one sun. No matter what configuration you look at, there are some major problems with the second star. Be it devastating solar flares, a ruined day night cycle, having a neighbour that might explode at any moment, having our orbit completely eaten up by the volume of the star, huge swings in seasonal temperature changes, having our electronics wiped out regularly, UV radiation and likely more that we haven’t mentioned.

In reality, even if life as we know it does exist around binary star systems, they have some major obstacles to overcome to get to where we are now. So, let us be grateful for our boring, but steady and safe star, the Sun. Long may it continue to be so.