‘Mira’ The Weirdest Star Ever Discovered

The star Mira, which is also known as Omicron Seti is a red giant star. This star is estimated to be between 200 and 400 light-years from the sun in the constellation Cetus which is named after the sea monster in Greek mythology which both Perseus and Heracles needed to slay. While oseti which has been Latinized to Omicron Seti, is the star’s Bayer designation. He was also named Mira by Polish astronomer Johannes Hevelius in his 1662 publication Historiola Mire Stella.

Mira is an extremely appropriate name for this bizarre star as it translates from Latin as wonderful or astonishing. The International Astronomical Union organized a working group on star names in order to catalog and standardize proper names for stars. The group’s first bulletin in July of 2016 included a table for the first two batches of names they had approved and the list included Mira for the star, making it absolutely official.

Mira is a binary stellar system consisting of Mira A which is a variable red giant along with Mira B which is its white dwarf companion. What makes Mira A so interesting is that, it is a pulsating variable star and it was the first non-supernova variable star discovered with the possible exception of Algol. It is therefore a prototype of the class of pulsating stars known as Mira variables.

Mira has been known to us since ancient times but its unique nature only became apparent in the 16th century. A German pastor, an amateur astronomer by the name of David Fabricius, a man who regularly corresponded with the more famous and renowned astronomer Johannes Kepler. David Fabricius discovered that the star’s brightness changed periodically every 11 months. These changes in the brightness were not just by a small amount, these changes were huge or perhaps more appropriately they were astronomical in their magnitude.

As a general rule, Mira isn’t a difficult object to observe when the time and conditions are right. At peak brightness, it shines at a healthy second or third magnitude which is more than bright enough for it to be observed by the naked eye. Conveniently, it was almost peak brightness in august 1596 when Fabricius observed it from his home in Germany near the border of what we now know as the Netherlands. A few months later when he attempted to view it again he was shocked as it seemingly vanished. Where did it go?

Mira’s disappearing act initially led Fabricius to believe that the star was a nova which is a rare but amazing type of star that brightens very suddenly then disappears from view permanently. However, to his astonishment he saw it brighten again nearly 13 years later and in 1609 he knew he discovered a new class of celestial objects known as long-term variable stars.

This variable star was viewed on many further occasions throughout the 17th and 18th centuries and those subsequent observations revealed that it varied in brightness with a period of around 333 days. Those variations ranged from about magnitude 2 or 3 down to a magnitude of around 10.0, which is a factor of about 1500. What does all this mean? It means that it is the largest variation of stellar brightness in anything other than the more cataclysmic variables such as novae or supernovae.

The depth and periods of the variability of Mira are not precisely regular like they are in the case of the aforementioned variable star Algo for example. But the periodic variability was clear enough and impressive enough for Johannes Hebelius to give it its wonderful and astonishing name.

But exactly what is it that causes Mira’s astonishing variability? well the shortest and simplest answer is that it’s currently experiencing a phase of its evolution whereby the pull of gravity and the burning of hydrogen fuel in shells around its core are contesting with each other which causes regular pulsations. With the transparency of hydrogen ions in the outer atmosphere acting as a sort of on-off switch to start each cycle afresh.

Gravity pulls the outer layers of the star inward for a few months which increases the temperature of the outer layers and increases the opacity of ionized hydrogen. The increased heat in radiation pressure builds up resulting in the expansion of the star. The ions then grow transparent and cool resulting in the outer layers falling back towards the star’s core. Think of it as though it’s a weight on the end of a spring bobbing up and down within the earth’s gravitational field. The spring pulls up, the earth pulls down and that process is repeated over and over. During said process, a star is at its brightest when it nears its smallest radius when it’s at its hottest. 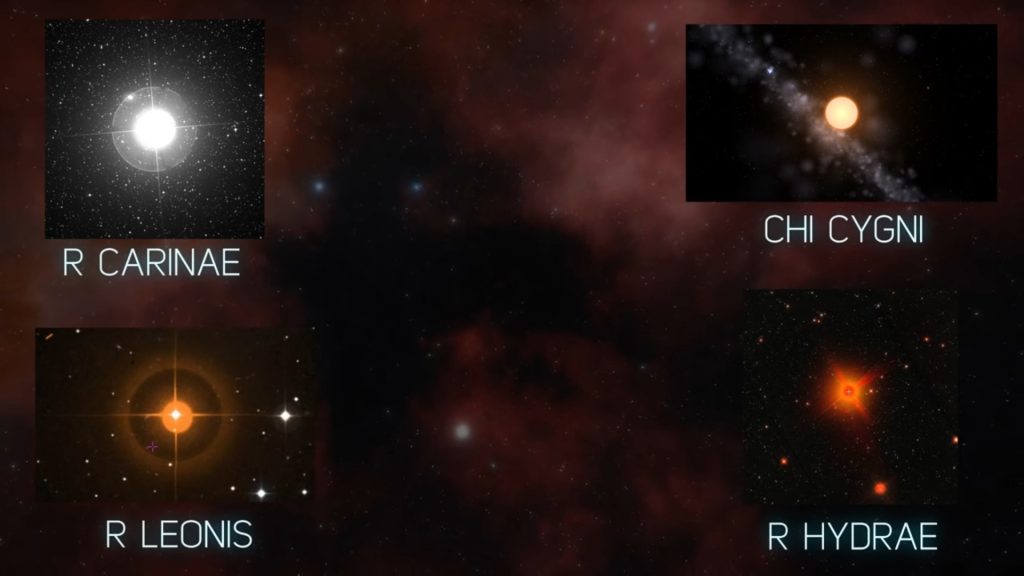 As we briefly touched upon earlier in the article, there is now a whole class of long-term variable stars called Mira variables of which Mira itself is obviously the most well-known. Chi Cygni, R Carinae, R Hydra and R Leons are amongst a fairly long list of others whose variable brightness are also visible to the naked eye. Stars of this nature, all boast a deep red coloring and tend to vary over many months by several magnitudes. Essentially they’re all red giant stars that are incredibly advanced in terms of their life cycles having run out of hydrogen fuel in their cores a long long time ago.

As a result, the internal parts have compressed and heated to burn heavier elements like helium and their red coloring is further enhanced when in some cases they pull out enriched material from their cores. As millions and millions of years pass, a Mira variable will generally blow off its outer layer and turn into an aesthetically incredible planetary nebula, like the ring nebula and the dumbbell nebula until its core finally placates as a burned out ember that we call a white dwarf.

Interestingly, our own sun will also go through such a phase in around 5 billion years time. So the process will certainly have implications closer to home eventually. This essentially means that when we observe Mira we are actually getting a sneak peek at the distant future of the very star we orbit as it begins its inevitable demise. 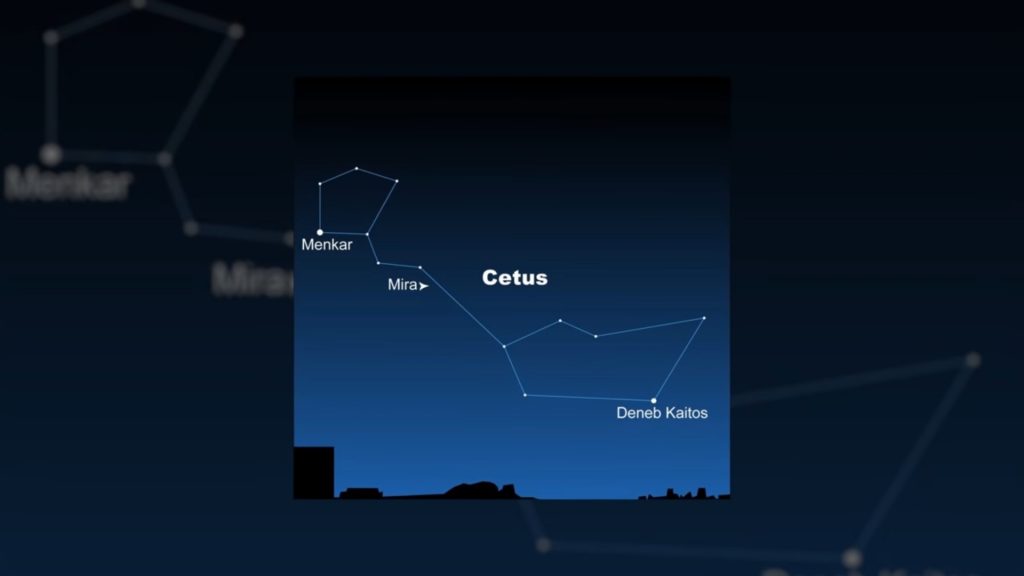 If Mira is something that sounds interesting to you, then why not observe the variability of it for yourself? It can be found in the neck of the Cetus constellation and is visible from around September through January. For northern observers, it’s just over the southern horizon and it’s almost directly overhead for those in the southern hemisphere. Don’t despair if you can find Mira without the aid of specialist equipment, it probably just means it’s at a point in its cycle where it’s dimmed. The truth is, the majority of its existence is spent being invisible to the naked eye. If the conditions make it so it’s actually possible for two or three years to go by without people being able to see it. Regardless Mira really is the sight to behold when it becomes visible to the naked eye in the space of a couple of weeks.