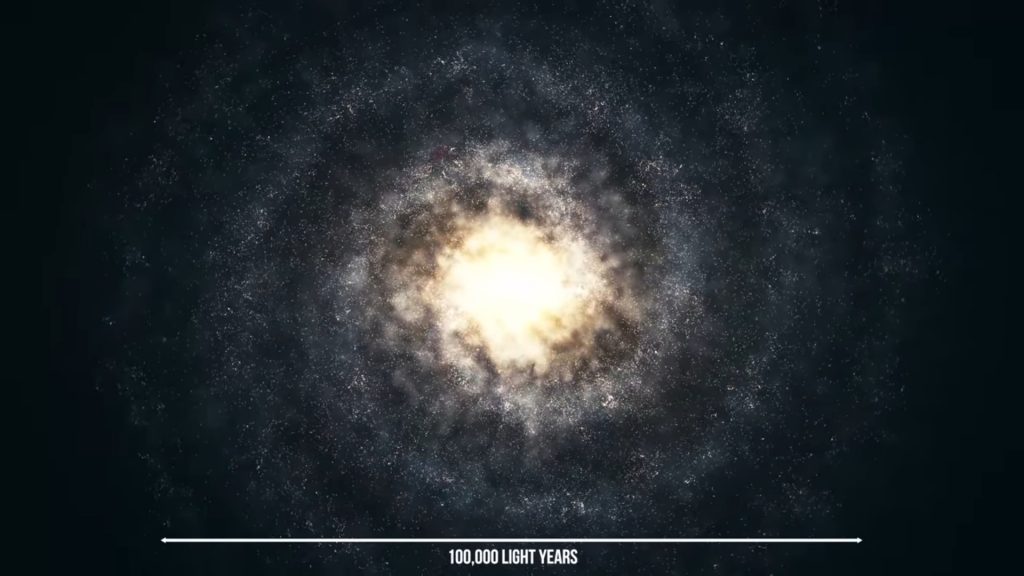 At the heart of the solar system is our closest star, the Sun, an enormous blazing sphere of glowing plasma that provides light and warmth to our planet. But although Sun is special to us, it is just one of the hundreds of billions of stars that make up the Milky Way galaxy. Our solar system is located on the inner edge of a vast spiral arm, and like all of our neighbouring stars and their orbiting planets, we are hurtling through space, rotating around the very middle of the galaxy, a strange region known as the galactic center.

The Milky Way received its name because it appeared to ancient observers to be a milky band of light, a cosmic roadway stretching across the night’s sky. But If we could view the galaxy from above, then it would look like an enormous glowing spiral about 100,000 light-years wide.

Our solar system is in the Orion spur arm and is approximately 26,000 light-years away from the galactic centre. A journey that would take you more than 450 million years if you could travel at the same speed as the interstellar spacecraft, Voyager-1 which is our most distant human-made object.

From our vantage point, the middle of the galaxy is located in the direction of the constellation Sagittarius, where there is a massive collection of millions of exotic objects, all concentrated within an area approximately 20,000 light-years across. This bulge of bright cosmic bodies surrounds the galactic center, blending with a straight bar-like glow of stars that connect the inner regions to the galaxy’s magnificent spiral arms.

However, this bright area is not easy to spot from Earth, as it is hidden behind enormous clouds of dust and gas that can be found throughout the Milky Way. Similar to what we can see when we gaze at the Andromeda Galaxy. You can imagine it like an interstellar smog, filtering out the visible light from distant regions and obscuring our view.

It took until the mid 20th century before astronomers confirmed where the centre was truly located. But it wasn’t until the introduction of infrared telescopes that we finally got a glimpse of what this bizarre region really looks like. In infrared light, the dust or smog that blocks our view of the core becomes virtually transparent, fading away to reveal the wonders of our galaxy’s chaotic heart. 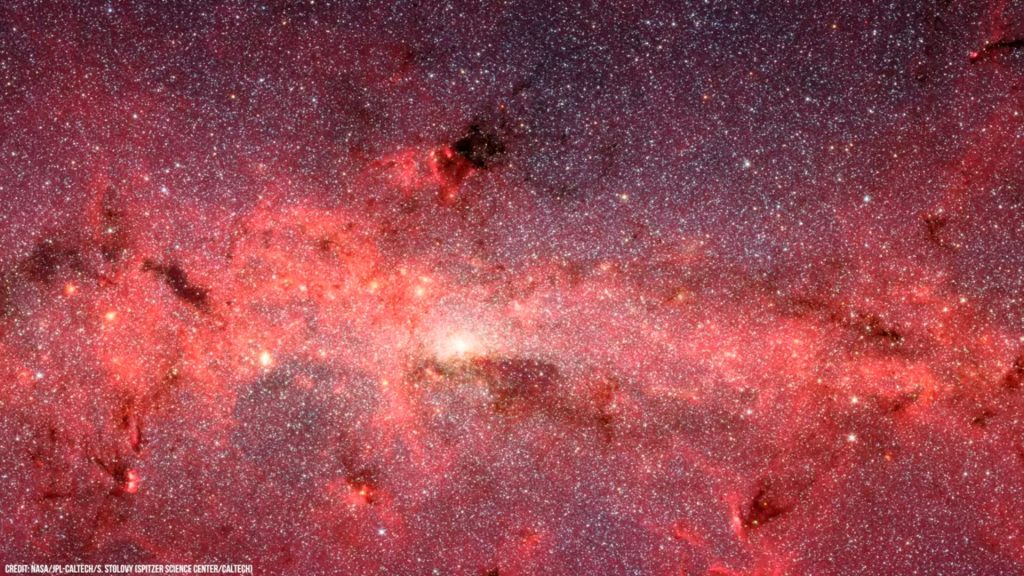 Spectacular panoramic infrared images such as the above one from NASA’s Spitzer space telescope, capture some of the magnificent structures and objects that exist within this active region. The image spans an area 890 light-years wide and exposes hundreds of thousands of stars crowded into the swirling core of the Milky Way. The old, cooler stars can be seen as blue dots, while massive stars have a reddish hue. Bright and dark clouds are visible, many of which harbour stellar nurseries and giant, mysterious lobes of dust can be seen extending away from the plane of the Galaxy. 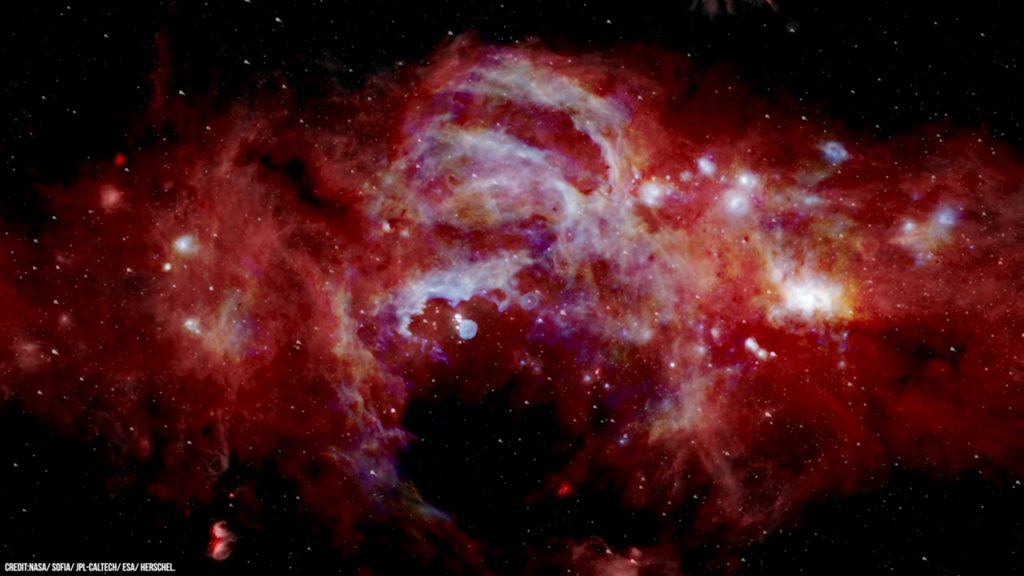 By adding this image to the data collected by other telescopes, we can also get a much crisper view. The above composite infrared image combines data from the Spitzer, SOFIA and Herschel observatories providing us with a closer look, in much greater detail. It spans an area 600 light-years wide, revealing features such as the vast curves of the Arches cluster. The densest concentration of stars found anywhere in our galaxy and the Quintuplet cluster, the home of the pistol star, one of the most luminous and massive stars known in the Milky Way.

But it’s not just infrared images that can reveal this shrouded region. Other wavelengths such as X-rays and radio provide us with a completely different look at the galactic centre. The above colourful image from the Chandra X-ray observatory and the Meerkat radio telescope show us threads of superheated gas and magnetic fields weaving a tapestry of energy.

Within this cosmic masterpiece, each X-ray dot or feature represents an energetic source, from neutron stars to black holes and even white dwarf stars tearing material from companion stars. But the most intriguing feature found within the galactic center is concealed within all of this bright cosmic energy and matter. Because at the very core of the Galaxy there is a monster, a supermassive black hole called Sagittarius A.

A supermassive black hole is an object packed with so much mass that its own gravity prevents even light from escaping. We cannot see this elusive object directly, but powerful telescopes can observe the swirling matter that encircles it and in some cases, the gravitational influence it has on the motion of nearby stars.

Although it is truly massive, compared to other supermassive black holes in other galaxies, Sagittarius A however has been found to be relatively quiet, a sleeping giant that flares only occasionally with bursts of X Ray’s and infrared light as it devours objects around it.

The heart of the Galaxy is a chaotic and inhospitable place for life as we know it. It is rife with radiation from stars and material being torn apart by the powerful gravity of Sagittarius A. But if we could make the currently impossible journey and stand on a sterilised planet within this bizarre region, the sky would be lit up with a blazing display every night, with stars possibly one million times denser than the view we are familiar with back home on Earth.

The closest star to the Sun, Proxima Centauri, is approximately 4 light-years away, but here stars are so concentrated that they typically are only a few light weeks away from each other. The night’s sky would be so bright that If life had found a way to exist close to the galactic centre, it might not even know of the universe beyond.

With the launch of the James Webb space telescope just around the corner, a new look at the galactic centre in infrared light is on the horizon. The brand new space observatory will have the capabilities of penetrating the dusty veil that obscures the region and reveal the heart of the Milky Way in unprecedented detail. Producing the highest quality images of the area obtained so far. The only question is, what wonders will we discover this time?