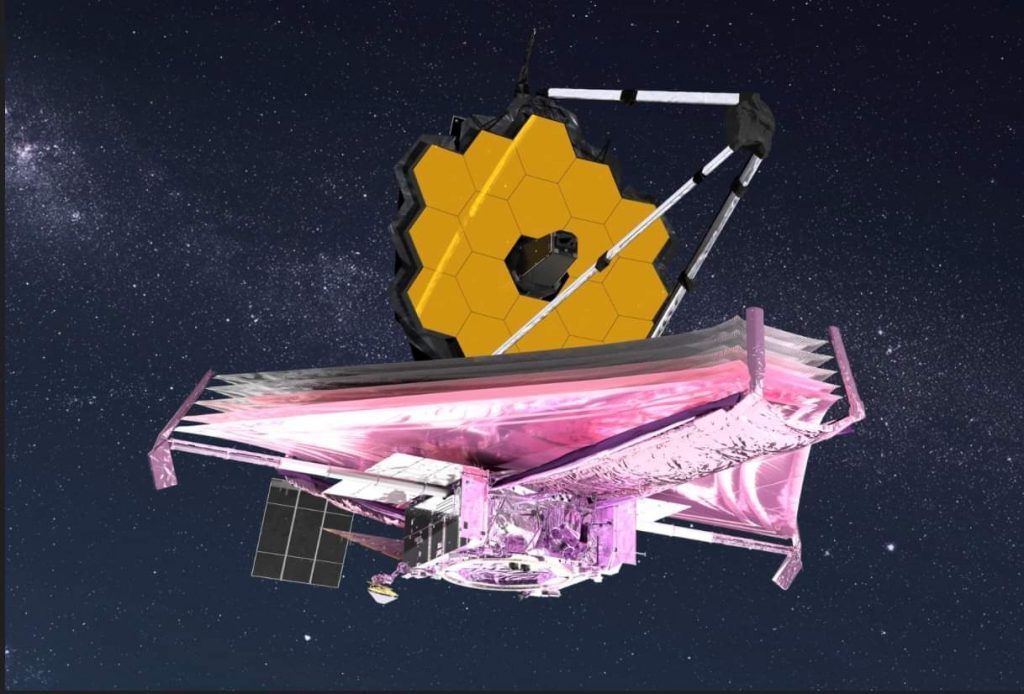 The James Webb Space Telescope was named after the NASA administrator who oversaw the Apollo moon landings. This space behemoth is the largest, most powerful and most complex space telescope ever built. It has been hailed as the successor of Hubble, which itself was instrumental in expanding our understanding of the universe over the last few decades. James Webb telescope has undergone major redesigns, costed $9.7 billion to build and has taken 25 years to fully develop, construct and test.

There were moments in its decades-long construction, where it was very nearly cancelled completely. And yet with the aid of scientists from several nations around the world, it has overcome hurdle after hurdle. But for all this, it will only last in space for a maximum of 10 years.

Why have scientists undertaken the construction of this telescope? Why put all of this time, money and effort into building something that will be relatively speaking, so short-lived? The answer is because this telescope, in a way unlike any before it, will allow us to peer through time to the beginnings of the universe itself.

The James Webb Space Telescope first began in 1996. NASA at that time had for years been considering a Next Generation Space Telescope to help them find the data they desired, and the original plan was to make an 8m aperture telescope that would cost approximately $500 million.

However, as time went on, decision-makers realised that far more resources would be needed to achieve their aims. But what exactly were their aims? Well, the NGST was to be an infrared telescope. Hubble had been functioning since 1990, but its primary range was the visible and ultra-violet light spectrums. Although it had some infrared detection capability, this was somewhat limited.

Why do scientists want a  powerful infrared telescope? Well, this comes down to some fundamental facts about the universe itself. Scientists believe the universe as we know it has existed for roughly 13.8 billion years. How it all began is a fascinating question and one that many have theorized over. Current mainstream theories revolve around the idea of a “Big Bang,” where all matter existed in a space that was so small, it was effectively zero. Atoms did not even exist at that stage, they would have been too large.

Suddenly, everything expanded outwards at once. The matter began to coalesce into atoms, then dust, then stars and planets, and the universe has expanded and cooled ever since. But wouldn’t it be helpful to be able to look back and see for ourselves those first moments of creation, or the formation of those first galaxies? That might give us insights into exactly how all of it happened. The James Webb telescope will either provide evidence for the big bang or completely change our theories thanks to the way light travels.

While light is blindingly fast, it is not instantaneous. There is a tiny time delay between when light is emitted, and when we see it. Photons, or particles of light, travel at a constant rate. 299,792,458 m/s exactly. Our sun sits at a point 147.87 million km from us. This means that it takes approximately 500 seconds for light to travel from it to us. So, what you see in the sky right now is not the sun as it is, but the sun as it was 8 minutes and 20 seconds ago. This time delay becomes severe even when you consider things that are relatively close to us.

The next nearest star, Proxima  Centauri, is so distant from Earth that it takes 4 years for its light to reach us. All of this means that for objects that are further and further away from us, we would see it as it was further and further back in time. If there was an object sufficiently far away, we would see it as it was 13.8 billion years ago, at the origin of the universe. And fortunately, as some speculate, we exist in an infinite universe, so such faraway objects should in fact exist. With the James Webb  Space Telescope, we hope to be able to see them.

But why does the James Webb Telescope view in the infrared? Well, one reason is that infrared light tends to punch through clouds of the cosmic matter better, allowing us to see past otherwise opaque gas clouds to see what lies on the other side. But the main reason, and the one that is relevant to seeing those early galaxies, is because of a second quirk of the universe, the fact that space is expanding. For reasons that we don’t fully understand, but which scientists currently theorise are the result of dark energy, everything in the universe is moving away from everything else constantly.

As a star moves away from us, the light from it is stretched in a process known as the Doppler effect. And because the wavelength of light is the part that defines what colour we see, as light stretches, it shifts further and further towards the red half of the spectrum. But this expansion is not constant. Scientists have observed that the further something is away from us, the faster it is expanding away from us too. This means that light from the furthest away galaxies has shifted so far into the red that it has gone beyond it, into infrared frequencies.

If you and a friend each held a candle on a clear night and walked away from each other, it wouldn’t be too long before your candles started to look dimmer to the other person. This is because of the inverse square law, where light photons spread out with distance. Plus, light tends to scatter when it passes through matter, and although space is extremely empty, there are enough particles of dust floating around that over the vast distances of space, objects that are far away get more difficult to see.

To combat this, the James Webb telescope houses a gold-plated Beryllium mirror that is 6.5 m in diameter. This makes it’s surface area 6 times larger than that of Hubble’s mirror. This larger mirror is designed to catch more light from distant sources before focusing it back into the telescope’s instruments, allowing them to pick up fainter traces of radiation.

Furthermore, as the name suggests, the James Webb Telescope is a space mirror. Being in space means that the telescope does not have to contend with the Earth’s atmosphere, which can diffract and distort light waves that pass through it. The vacuum of space provides a much clearer view, allowing the James Webb telescope to find those tiny diffuse infrared waves much more easily.

The James Webb telescope will be orbiting the earth in a position known as the L2 Lagrange point. This position in space is technically not a true orbit, but exists 1.5 million km from the Earth at the point furthest away from the sun. For point of reference, the moon is 384,400 km from the Earth, so this is much further out. Due to the way the Earth’s gravity interacts with the Sun’s, this point of space is gravitationally stable, making it easier for an object to hover there with minimal effort. This makes it an ideal viewing station for an orbital telescope.

One spacecraft was sent there already which was the Planck space observatory. The distance from earth is far enough away that the James Webb telescope does not have to contend with any radiation bouncing off the Earth or the Moon, but is also close enough that it can send signals back to Earth telling us what it sees. Naturally, at this position, it will be very difficult for us to visit the James Webb Telescope.

So, although the James Webb telescope was designed with a docking ring, it is currently planned that there will be no missions to the James Webb telescope to service or replace its parts once it is up there. Although it needs minimal effort to maintain its position, minimal is not zero. The James Webb Telescope has enough fuel to maintain its position for at least 5 years, and at most 10.  After that, it will decay from its orbit and will no longer function. It has a guaranteed expiration date.

One final benefit of this position, however, is the temperature. Because heat travels in infrared waves, the heat generated by the telescope’s own parts could potentially blind its own sensors if left unchecked. However, thanks to its position in space the James Webb Telescope will be able to cool itself to temperatures of -223 °C.

This is also aided by its solar shield. You must have noticed the large silver canvas at the bottom of the satellite. This 5-layered shield is the size of a tennis court and is designed to point in the direction of the sun, Earth and Moon to block heat coming from them. With that last fact, you may have begun to realise the scale of this satellite.

It is vast, roughly 20m x 14m, and weighing almost 6,500 kg. This raises a question, how are they going to get this telescope into orbit? Well, that is explained by one of the most frankly astounding engineering aspects of this telescope which is its capacity to fold up and unfold.

Once it has been launched and while it is traversing space to its Lagrange position, the James Webb Telescope will begin gradually unfurling in a delicate ballet. Arms will unfurl, shields will unspool. The hexagons of the mirror will rotate  into position, and then align themselves with the aid of tiny motors until they are perfectly flush with each other, all to allow it to go about its incredibly delicate business of gathering radiation from the dimmest lights in the sky.

Mastering this process of getting such a sensitive device into orbit without something breaking is the reason the James Webb Telescope has taken so long to build. Remember, once launched, there is no chance of going up there and fixing it. If something broke during deployment, it could spell the end of the entire mission, wasting over 2 decades of work and $9.7 billion.

In 2005, just a few years before the initial intended launch date, the entire project underwent a fundamental redesign. Everything was checked and double-checked by review boards. In 2018, the project was further delayed when a test of deploying the solar shield ended with it ripping. A review of what went wrong found an additional 344 potential single-point failures, any one of which breaking would mean that the entire thing would no longer work.

When costs started rising in 2011, the American Congress moved to reduce NASA’s budget as a way of cancelling the James Webb Telescope. However, the public backlash in support of the project ultimately led them to reverse their decision. The James Webb Telescope was built by NASA in cooperation with the European Space Agency and the Canadian Space Agency. It has been delayed over 13 times. Its project costs have increased from $500 million to $9.7 billion. But finally, very soon, it will be here. Its mission to peer into the heart of space, and uncover the mysteries of the formations of the first galaxies, stars and planets, will finally begin.