What Would It Be Like To Stand On The Closest Exoplanet To Earth The ‘Proxima B’?

March 15, 2019April 11, 2020 admin
Proxima Centauri B is the closest known exoplanet to Earth and it orbits the star named Proxima Centauri which is a closest star to our Sun. This exoplanet was discovered in the 2016 but despite the fact that it is closest planet outside of our solar system that does not tell the true scale of how distant it actually is. This planet is about 4.2 light years away from the Earth which means we see Proxima B 4.2 years in the past because light which is the fastest thing known takes 4.2 years to reach our planet from Proxima B, if we translate this distance in kilometers it is 38 trillion kilometers away from us, the fastest of our probes sent into space that are travelling at couple of tens of kilometers per second even to those probes it would take about 70,000 years to reach this planet, so it is safe to say that we are not visiting this planet anytime soon, but what if we did somehow manage to do it? and we find ourselves on the ground of this exoplanet? what would it be like? 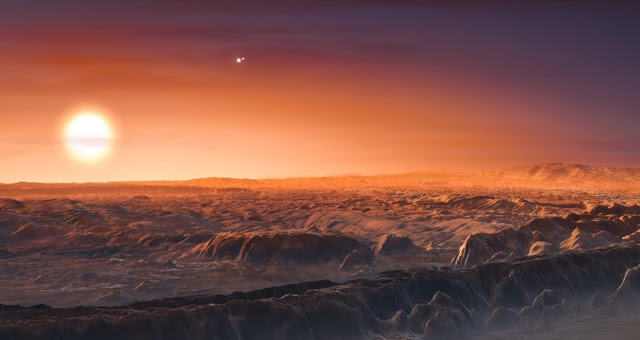 Looking at Proxima B from space it would be noticeably big as it is 1.3 times more massive than the Earth and is likely has a larger diameter than the Earth, scientists are not exactly sure how it’s surface looks like but likely as it is massive enough there would be lot of mountains and natural shapes that come with geological activities. As we land and step onto the surface with our spacesuits, it would be noticeable that we would be a bit heavier as the higher mass of the planet suggests higher density and thus higher gravity, so moving around would be a bit harder but overall the gravity should feel similar to that on Earth.

As we look in the distance we likely would not be able to see much of the atmosphere that is because the Proxima B is constantly getting bombarded with huge waves of solar winds and this alone is enough to wipe out any atmosphere that would be present on the planet and the solar winds are very constant because Proxima B is orbiting it’s star at a distance of only 7 million kilometers which is 21 times closer to it’s star than the Earth is to Sun and that is why solar winds have such a great impact onto the planet, also because Proxima B is so close to the star it receives 400 times more X ray radiation than the Earth does which means we will likely die of radiation poisoning quickly if we stand on the surface without any protection.

Interestingly the temperatures while standing on the planet would not be that high and that is because the star the Proxima B orbiting is a dwarf star so it’s luminosity is much lower than our Sun and the star is also much smaller compared to our Sun, that could put the temperatures on the planet at around -30 degree celsius which is not that extreme but still the radiation would be deadly. 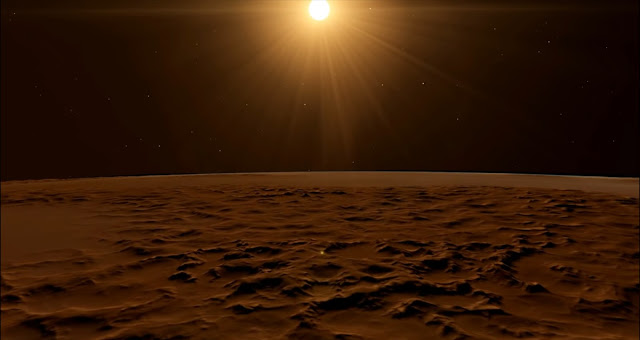 Let’s say we are somehow protected from all possible dangers on the planet, so as we move around the planet we likely would notice many mountains, volcanos and other interesting but predictable geological features. Now, we do not know how the ground of the planet would feel like, it could be icy or it could be rocky but it is more likely that it is more icy considering the lower temperatures on the planet, so because of that the ground would likely appear to be a bit shiny.

As we look up into the sky, the star Proxima Centauri would appear enormous but it would not be that hard to look at directly as it is much less luminous than our Sun, but interestingly the other two stars that are in the Alpha Centauri system would all be visible and also be very bright, it would seem as if they are other two Suns and as Proxima B is likely tidally locked with it’s main star meaning one side of the planet always facing the star but interestingly the other side of the planet which is supposed to be in all darkness is actually light up by the other two star in the Alpha Centauri system which means there is always day on this planet everywhere.

Another interesting fact about this planet is that it is older than our Sun, with the current technology it’s impossible to visit this fascinating exoplanet but we should keep on developing new efficient engines such as antimatter engines that could get us there in couple of decades and one day we may set a foot on a planet that is outside of our solar system.