What Would It Be Like To Stand On Jupiter’s Moon Europa? 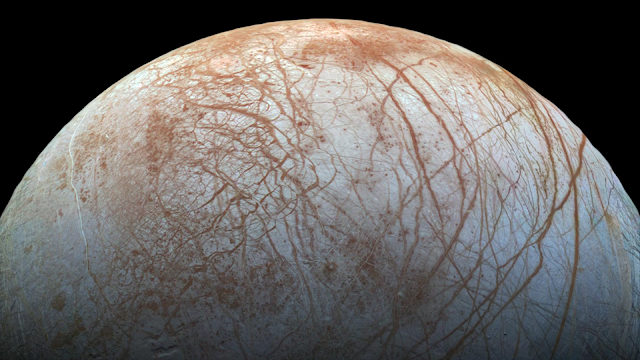 390 million miles from Earth lurks the icy Galilean moon Europa, this frozen natural satellite is one of the 67 known moons that orbit around the mighty planet Jupiter. Scientists believe that below Europa’s thick icy crust a vast ocean flows, scientists also believe that the Europa is the most likely place within our own solar system beyond our own planet to have life living within it’s vast ocean which makes it an extremely interesting moon, so if one day in the future humans have developed the technology that would allow us to travel and descend onto the frozen surface of Europa, what would it be like? Europa is one of the smoothest objects in the solar system and this is because of it’s icy tectonic plates moving on top of a warmer layer of convective ice resulting in surface being constantly recycled and this means when the space explorers step outside onto Europa’s frigid landscape for the first time, they probably would not see huge ancient crators or towering mountains but instead they would see many cracks and ridges some of them may be more than 12 miles wide crisscrossing through the thick icy crust.
It has also been theorized that the Europa’s equator is covered by countless 10 meters high icy spikes called Penitentes which are caused by the effect of direct overhead sunlight melting the vertical cracks on the moon’s surface. The astronauts would need a special suit as the Europa is no place for human beings, the blistering surface temperatures of this frigid moon can be as low as -220 degree celsius depending on where they landed and the radiation levels that Jupiter emits would cause severe illness or death if the astronauts were exposed even for a single day. Europa’s thin atmosphere is composed solely of oxygen that is maintained by charged particles hitting the cold icy surface and producing water vapour, however that amount of oxygen would be far too small for the exploring human beings to breath. The astronauts would feel much lighter as the gravity on Europa is just about 13% of Earth’s which would make them feel like they are walking on the surface of our own neighboring moon, because of Europa’s weak gravity and thin atmosphere the exploring astronauts would not experience any wind or rain but instead it would be calm, however the explorers might have to withstand some small ice quakes or giant water flumes shooting out of the icy crust.
Looking up into the sky the astronauts would mainly see the cold dark vastness of space but they would get the most spectacular view of Jupiter which would look 24 times larger than our own moon appears from Earth’s surface. Scientists believe that the Europa has many more incredible surface features that hopefully will be discovered or confirmed when the space organizations around the world capture more high resolution images of this mysterious moon in the future, but what makes Europa one of the most interesting, important and exciting celestial bodies in our solar system is that within the Europa’s deep ocean there could be lurking alien life which if discovered would prove that the life can independently pop up anywhere in this vast universe.