What Would We See If We Fell Into Planet Jupiter? 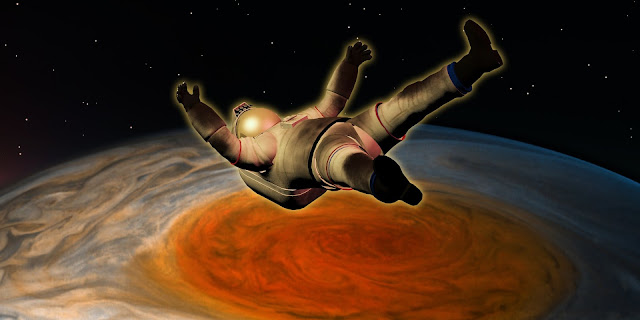 Jupiter is the largest and the oldest of the 8 planets in our solar system and is by far one of the most mysterious worlds in the solar system, Jupiter is so big that 1300 planet Earths could fit inside of it and it’s huge gravitational pull is also believed to played an important role in protecting Earth from potentially deadly planets. Jupiter is mainly made up of hydrogen and helium gas just like the Sun plus other chemical compounds such as methane, ammonia and water that help to form it’s distinctive atmosphere.

Ever since Galileo first turned his telescope upon the colossal gas planet and witnessed it’s magnificent swirling bands of clouds scientists have wondered what might be hiding inside of Jupiter, in modern times science has developed better ways of exploring the gas planet than just a telescope such as Galileo spacecraft and most recently Juno, these incredible spacecrafts have collected data that has allowed scientists to study many aspects of this colossal planet including answering the question of what lurks inside of it? so let’s put on our science fiction spacesuits and dive directly into this strange world to see what lurks deep below Jupiter’s clouds.

Let’s assume that we have been equipped with special science fiction spacesuits that will protect us from the devastating environment that Jupiter has to offer such as it’s frigid and scorching temperatures, deadly radiation, lack of oxygen and it’s colossal pressures for example. We would first fall through the high white ammonia clouds at a pressure of about 0.5 atmospheres, because the gravity of Jupiter is so strong we would be descending roughly 2.5 times faster that we would fall towards Earth, the Sun’s light would still be visible but it would not warm us as it is incredibly cold at this altitude with a temperatures of below -150 degree celsius, we would eventually reach the bottom of the ammonia clouds feeling a pressure of 1 atmosphere and at this point the Sun can still be seen but it’s light would be filtered by clouds above resembling overcast day on Earth, but below we would see next stage of our journey, rolling brown ammonium hydrosulphite and ammonium sulphite clouds which start at a pressure of about 2 atmospheres and becomes more and more brown the further we travel through them.

As we enter these clouds the light from the Sun will slowly diminish  and temperature would start rising up due to the ever increasing pressure around us, the further we descend the darker it will become until it is completely black but then huge flashes of lightning illuminate the now dark environment we find ourselves in revealing towering white water ice clouds that are causing rumbling thunder storms to occur, as we pass through these clouds the pressures would increase to a crushing 10 atmospheres and the temperatures would rise to 20 degree celsius, let’s say using our high tech scifi helmets we can now see what is around us but we would quickly realize that the cloud layers were the easy paths of our adventure as we emerge from the bottom of the water ice clouds the pressure would become intense and the temperatures would drastically increase to about 200 degree celsius, after a very very long time of sinking we would start to notice that the atmosphere is becoming thicker and eventually we would stop as our density equals out with the environment around us but let’s say our suits are extremely high tech and it allows us to sink further just to see what lies beneath.

After an extremely long wait we would have now sunk 13000 miles into Jupiter and into the metallic region where the pressure is about 2 million atmospheres, at this stage the hydrogen has become so dense that it has become a type of liquid metal and this is what causes Jupiter’s strong magnetic field. The temperature would continue to increase becoming hotter than the surface of the Sun as the hydrogen metal around us glows white hot and illuminates the strange environment, after a seriously long time of sinking through this stage we would eventually hit the rock bottom literally and this would be the final stage of our journey, we would be standing on a surface perhaps 10 times the mass of Earth and made of rock and exotic ices at a pressure of about 25 million atmospheres.