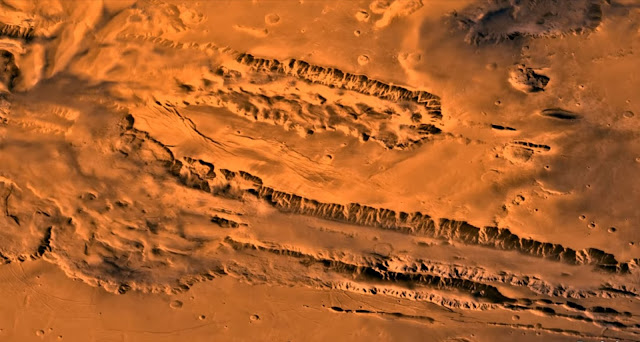 Valles Marineris which means Marina Valley is named after the Marina-9 probe which discovered this gigantic valley on Mars and this valley is huge, even from the space it is very distinct and is probably the most visible valley in our solar system but that does not mean it is the largest but it is indeed one of the largest and longest valleys in the solar system. Valles Marineris is amazingly 4000 kilometers long which is pretty much the same as the United States is in length but even more staggering is that it is 200 kilometers wide and at some places it can even be wider and that means the Valles Marineris is almost as wide as Grand Canyon on Earth is long, what this really means is that if we were in the middle of valley, we would have no idea that we were in the middle or even in a valley at all that is how huge it is.

Another pretty feature of this valley is that it is 7 kilometers deep which means that it is as deep as the tallest mountains on Earth are tall, thing is that the Valles Marineris would not be a bad place to set up a base on as there are many interesting geological features occurring plus the atmospheric pressure is much greater at the bottom of the valley than on the surface and that is a very good thing since the pressure on Mars on average is around 170 times lesser than here on Earth but at the bottom of Valles Marineris the pressure is around 90 times lesser than here on Earth which is still not good for us humans but much better than the average pressure on Mars.

Now the question is how did this amazing system of canyons form on Mars? well there is no definitive answer to that as there are many possibilities but the most obvious possibility is that it was formed through water erosion and that is because it is speculated that there was once water on Mars billions of years ago and there is good evidence for that. 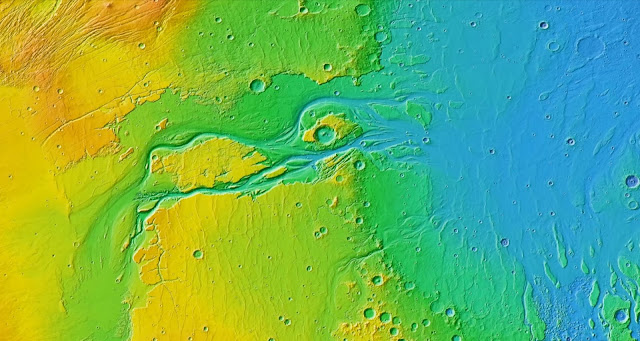 Through the topographic map above, we can see Valles Marineris is connected to the much larger area which has many artful channels which really looks like once water flowed through them at one point in the past billions of years ago. So this huge canyon may be once in the past filled with water, off course there is the other speculation and that is it was made through flowing lava, there are also many more speculations but these two are the most interesting ones, what could be also true is that Valles Marineris was in the past smaller but as landslides occurred, it grew in size.
There are many things going on in this valley, the really big one is that there are water ice fogs going on which were captured on a picture we can see above, there are seasonal water flows which occur on coperates chasma which is one of the warm martian slopes and the water is speculated to be extremely salty, perhaps the most interesting place in Valles Marineris is Noctis Labyrinthus which is a very rugged terrain with many different geological features occurring, there are dark sand dunes and big cliffs, so this giant valley is really quite interesting and it would be a really exciting place to visit with rovers in the future and it is arguably one of the best places to set up a future Mars base on.