The Great Red Spot Of The Planet Jupiter 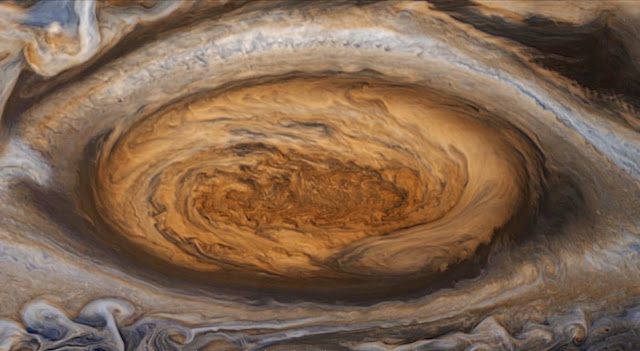 Jupiter is mostly made up of hydrogen and helium which are the same light gases that make up a star such as our Sun and it boasts a distinctive atmosphere of swirling bands of clouds that hide it’s extreme interior but one of the most extraordinary features on this giant gas planet is undoubtedly The Great Red Spot which is a storm raging on Jupiter since hundreds of years. Cyclones on Earth can grow to over 1000 miles in diameter whipping up devastating wind speeds that can reach above 200 miles per hour, storms such as these are capable of destroying entire cities in a matter of hours but Jupiter’s Great Red Spot makes even the most powerful cyclone ever recorded on Earth look tiny and weak.

The Great Red Spot is a giant anticyclone that rotates counter clockwise in the southern hemisphere of the planet and it is so big that it could engulf the entire Earth, like a tropical cyclone the center of The Great Red Spot will be relatively calm but further out the winds would rage at a speeds of up to 425 miles per hour, if we could experience the interior of the outer edge of the storm it would be devastating beyond belief. The storm has been raging for possibly more than 300 years but nobody knows when it first appeared, the earliest observations of a massive red spot on the face of the Jupiter dates back to the 16th century but astronomers are unsure whether this is the same red spot that we see today.

The giant storm is located between the two furious jet streams that are blowing bands of clouds in opposite directions at huge speeds trapping the red storm like a spinning wheel caught between two conveyor belts, because Jupiter is a gas planet without a solid surface like the Earth anticyclones can continue to grow and never becoming weakened by land like on Earth, smaller rotating storms moving along these wild jet streams have also been observed being consumed by the Great Red Spot and potentially increasing it’s size and energy, factors such as these are thought to play part at allowing such a massive storm to exist for hundreds of years but what actually drives the Great Red Spot is still a mystery.

Scientists studying the storm have also noticed that it is shrinking in size while becoming rounder, when the Great Red Spot was first discovered it was large enough to engulf around 3 planet Earths stretching more than an estimated 25,000 miles but now it is only around 10,000 miles wide and according to scientists if it continues to shrink at it’s current rate it will become more circular resulting in it being less stable and possibly disappearing within the next 20 years. One day the most recognizable feature on Jupiter the Great Red Spot may not be all that great as it is today or in the past as it would diminish gradually in size but at least we were able to observe one of the solar system’s colossal wonders.