What Would Happen If A Black Hole Appeared In Our Solar System? 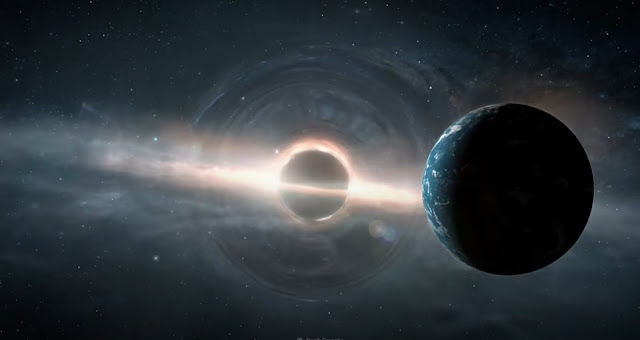 Black holes are not exactly holes, in fact they are large amount of matter that has been compressed into a very small space and because the matter is so compressed, gives it an incredibly strong gravitational pull such that not even light can escape a black hole’s grasp, and if we get too close to a black hole, we would get compressed to an infinitely small dot. A black hole entering our solar system would not be a good news at all but just how bad would it be? The extent of the havoc that a single black hole could cause in our solar system depends on how big that black hole was and how far into the solar system it got.

If we are talking of Super-massive black hole like the one residing  at the center of our own Milky Way galaxy which is Sagittarius A then our chances of survival would be very slim because a monster of that size would cause us trouble even from a distance of few light years away. Presumably super-massive black holes have stars, planets, asteroids and comets orbiting around them and all the debris that a super-massive black hole picked up on it’s way through space would bombard our solar system, then that gigantic black hole would tug whatever was left into an orbit around it, we would be long gone by that time, wiped out by some rogue planet that smashed into Earth.

if we talk of the biggest planet in our solar system which is Jupiter, the black hole would pull all the gases from the giant planet turning it into a swirling hot disc and it would keep pulling until it consumes Jupiter entirely. What would happen to our own planet Earth in this gravitational mess? well things would not be good for Earth obviously, the black hole would start affecting us even from a distance of Pluto’s orbit, first it will pull our planet out of habitable zone and we humans might not be ready to adopt to this change, we would not have much time to complain though since there would be worst things ahead as the black hole approaches Earth it would cause cracking of the planet’s crust, we would see extreme Earth quakes and volcanic eruptions, the ocean tides would be devastating too and by the time black hole pass Earth’s orbit.

There would be nothing left of our planet but a dead rocky object full of magma and may be Earth could be ejected from the solar system altogether and that would probably be for the best because when black hole got close enough to the Sun, it would start drinking up the Sun’s flaming gas until it consumes the entire star. If somehow Earth stuck around for the after party, it would be torn to shreds and consumed by the black hole and all the rest of the planets in our solar system would also face the same fate and ultimately the existance of our entire solar system would be completely wiped out from the universe.