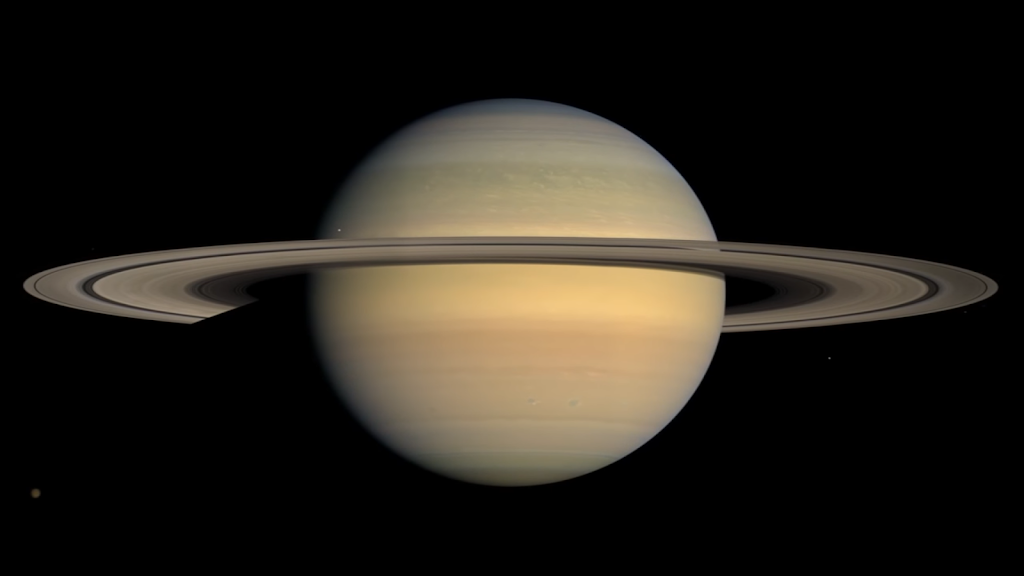 ​
Saturn is currently a gas giant that has iconic ring around it, Saturn also has some of the most interesting moons in the solar system. We know that the future of Inner rocky planets along with our home planet Earth is quite hellish during the Sun’s Red Giant phase, but what would be the future of Saturn during this phase of the Sun?

Over the course of billions of years as our Sun will slowly transition into the Red Giant phase, luminosity of the Sun would also increase by thousands of times of the current luminosity and what that means is that more sunlight would be reaching Saturn and in a couple of billion years rings of Saturn would slowly start to disappear and that is because rings of Saturn are mostly made of large particles that consists of water and over time as the heat would increase, icy form of that water around Saturn would vaporize and disappear.​

From Saturn, the Sun would also appear to be absolutely gigantic because the diameter of Sun would expand at least by 150 times it’s current diameter, so the Sun would be at least 150 million kilometers in diameter which is going to be enough to swallow planet Earth and probably Mars as well, Saturn would still be safe as it is at a distance of 1.4 billion kilometers away from the Sun. So those are the changes that would take place in the planet Saturn but what would happen to it’s prominent moons?​

Well let’s start with Titan, Titan is a moon that currently has a very thick atmosphere and lakes full of methane and ethane, so the future of Titan is very complex, as billions of years would pass lakes present on Titan would slowly start to vaporise and disappear into the atmosphere of Titan as they would be heated, also the atmosphere itself would be as well getting thinner because as it would be getting heated more and more by the Sun molecules in the atmosphere would also be moving faster and slowly escape the gravity of Titan, not all of them would escape but huge portion of Titan’s atmosphere would escape.

As that would happen, simultaneously surface of Titan would start to melt and because the surface of Titan is mostly water ice, some of that ice can actually turn into liquid water which means Titan would gain whole new lakes consisting of water but as the heating would get more intense from the Sun and atmosphere would escape even those lakes would start to disappear and what would be left now is ocean underneath the rocky surface which again would consist of water, life could also evolve there.​

Now let’s take a look at Enceladus, it is a tiny moon that has a lot of water in the form of ice and liquid, as many years would pass, this moon would just start to vaporise as it does not have the gravity to retain an atmosphere which is crucial for liquid water. Slowly it’s surface and then it’s ocean would vaporize and relatively very quickly. Now Enceladus would only be an small rocky core and it would look more like an asteroid which would be very empty.

Now let’s see at Iapetus which is a moon quite mysterious, but in future 80% of it’s surface area would vaporize, mountains present there would be much less spectacular, huge ridge that it once had would then not even be noticeable, the light and dark sides would probably also get a new color as most of the surface area would be vaporized.

So pretty much a similar fate is going to happen to all other moons of Saturn because lot of them consist of water ice and they would all lose massive amount of mass. So in it’s entirety in the far future, Saturn and it’s moons would not even look at all like they look today.