SEDNA The Mysterious World Beyond Pluto

Past all of the rocky inner worlds and the mighty gas giants, the dwarf planet Pluto can be found and at it’s most distant point it is 4.6 billion miles away from the Earth. Although Pluto is extremely far away, it is not the last world in our solar system. Traveling further into the outer reaches of the solar system reveals many more strange and mysterious objects that have been discovered hiding in the darkness of space.

So let’s travel beyond the icy world Pluto and find out what is lurking at the edge of the solar system. After all of the official dwarf planets, one of the most distant worlds ever discovered can be located, this mysterious object is Sedna and is one of many unconfirmed dwarf planets that lurk far beyond Pluto. Sedna has an exceptionally long orbit that takes approximately 11,400 Earth years to complete, at its farthest point Sedna travels 87 billion miles away from the Sun which makes it one of the most distant objects within our solar system ever to be observed.

The extreme distance of this world means if we could view the Sun from the surface of Sedna, we could plot out it’s light with a tip of a pin, in other words from Sedna Sun would appear just like other distant stars appear in the night sky when viewed from planet Earth but would appear brighter than all other stars in the sky.

The origin of Sedna is still unknown, however, one theory suggests that this small world is a member of hypothetical Oort cloud which is a region that is believed to surround the solar system like a shell and is made up of billions if not trillions large icy objects, while some scientists speculate that it was captured from another star system or even that it’s orbit is evidence of large undiscovered 9th planet.

Named after the Inuit goddess of the sea, this mysterious world is likely one of the largest trans-Neptunian objects after the official dwarf planets Pluto, Eris, Makemake and Haumea. Although Sedna’s exact diameter is not yet known, it is estimated to be between 568 and 668 miles wide which makes it smaller than Pluto’s moon Charon. 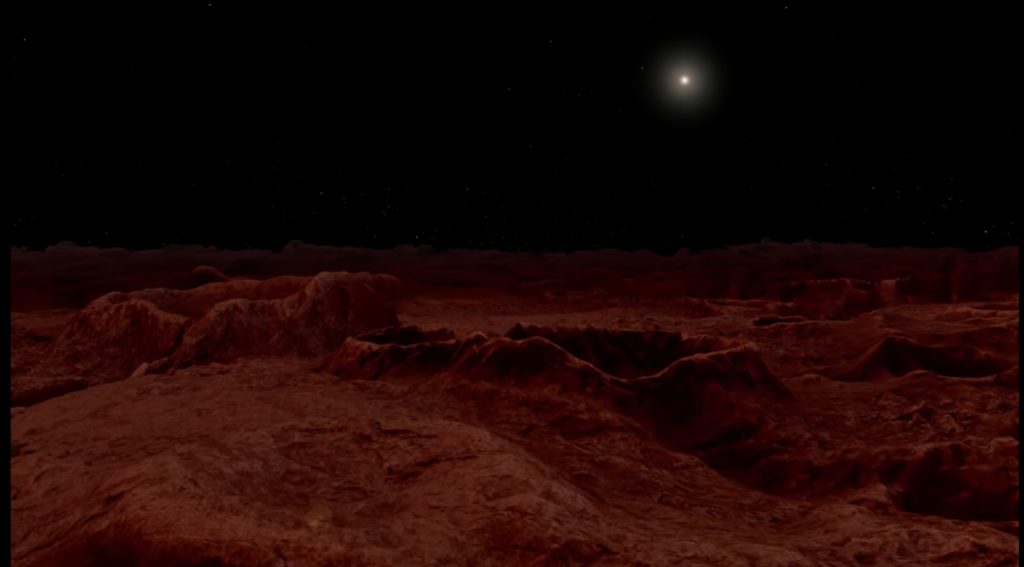 While it is not yet possible to describe what Sedna’s surface is exactly like, scientists have proven that it is made up from mixture of water, methane and nitrogen ices that appear to be stained in a deep red color which is likely a cause of complex molecules known as Tholins.

Because of Sedna’s incredible distance from the Sun, it’s surface temperature would be below -237 degrees Celsius or -395 degrees Fahrenheit which makes it one of the coldest places in the solar system. Between the years 2075 and 2076, Sedna will be at its closest point to the Sun approximately 7 billion miles away providing a possible future visit but until then Sedna will have to remain a mysterious object that lurks in the dark outer reaches of our solar system.