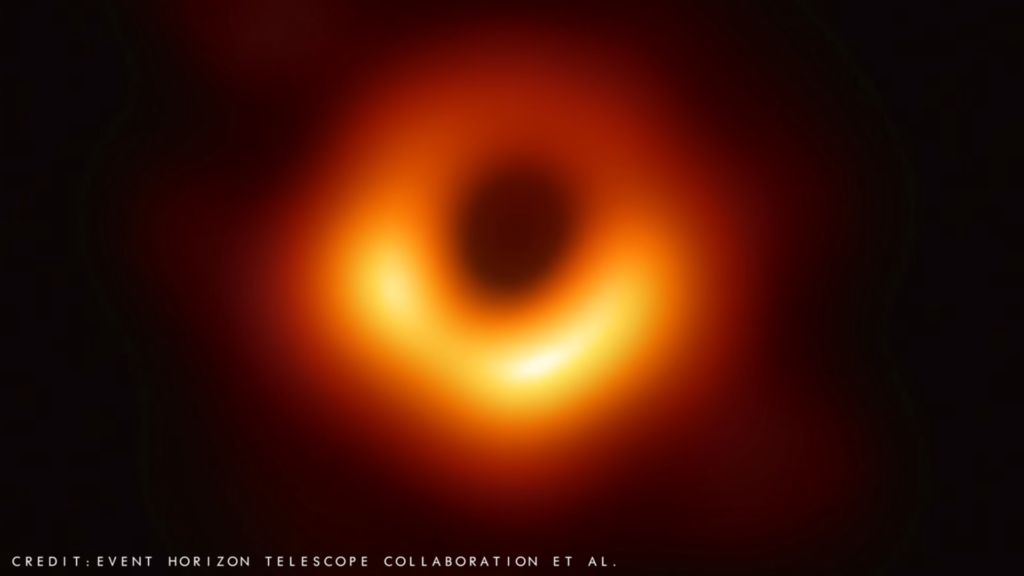 ‘Black holes’ are the cosmic monsters of the universe. These violent objects are anything but empty and dark regions lurking in space. Black holes are bodies of matter packed so tightly that not even light can escape their gravitational pull once it has passed the event horizon which is the point of no return.

The stunning image above reveals for the first time the shadow of a supermassive black hole that is surrounded by a bright ring of bending light and gas. It is located at the center of Messier 87, which is a large elliptical galaxy around 55 million light-years away. One of the reasons we can see this mysterious bright structure is because it is enormous.

The black hole at the center is estimated to contain 6.5 billion times more mass than the Sun. The event horizon, which is the middle section of the shadow inside the bright blob is estimated to be a mighty 23.6 billion miles across, which is around 38  billion kilometers across, making it more than three times the overall size of Pluto’s orbit. 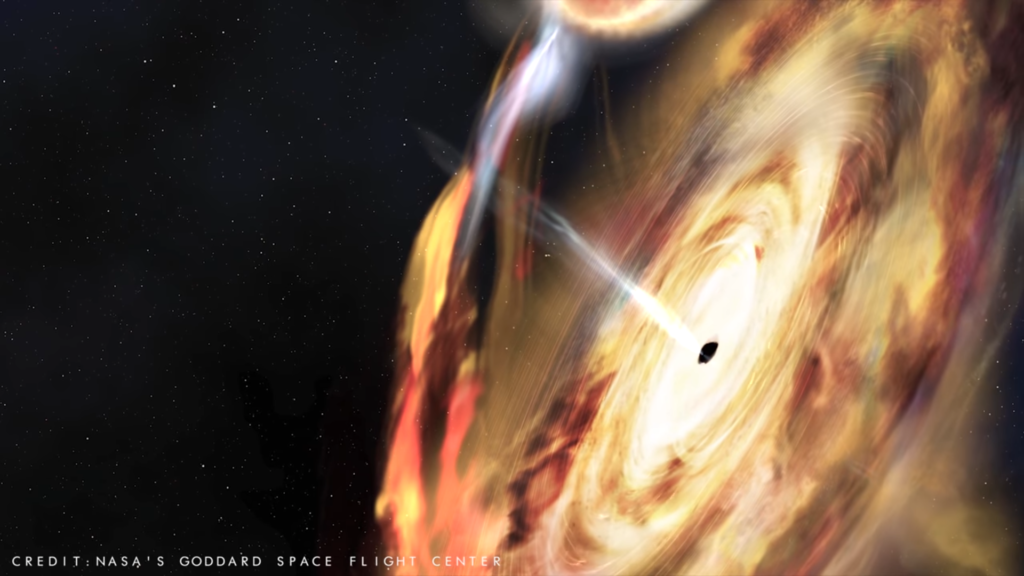 Although this supermassive black hole is truly gigantic, it is nowhere near the largest currently known to exist in the universe. This is ‘TON 618’, which is more accurately classed as a Quasar, an extremely luminous jet of light at the center of a distant galaxy. Hidden within this immensely bright object is believed to be an Ultra massive black hole. 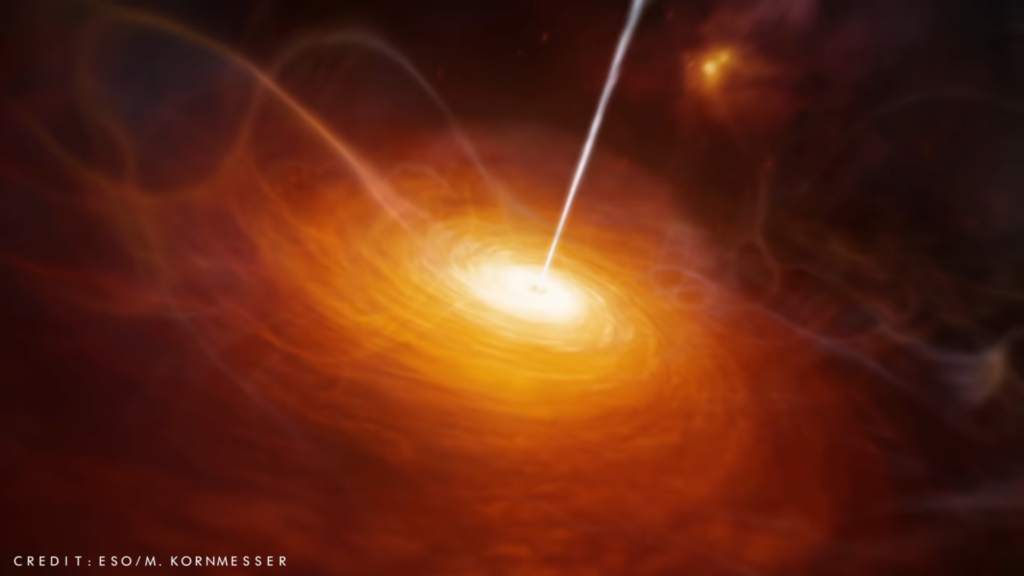 Quasars are thought to be caused by the material that is swirling around a giant black hole. As gas and dust rotates faster and faster outside of the event horizon, within a region called the accretion disk, it heats up, creating massive amounts of energy and forming powerful twin jets of radiation that is being blasted out into space for millions of light-years.

The light produced by this quasar is so intense that it outshines the entire surrounding galaxy, with an estimated luminosity equal to 140 trillion Suns, making it one of the brightest objects in the known universe.

The ultra massive black hole at the center is currently the largest and most massive black hole ever discovered. This monster contains a colossal 66 billion times more mass than the sun and has an estimated diameter of 242 billion miles or 390 billion kilometers, making it more than 40 times the size of Neptune’s orbit.

TON 618 is estimated to be more than 10 billion light-years away in the constellation of Canes Venatici and the only reason we have detected it is because it is so big and so bright. But although TON 618 is currently the largest known black hole in the universe, according to scientists there could be much, much bigger ones out there.

In a recent study, it has been suggested that black holes containing more than 100 billion times the mass of the sun could possibly exist. They have even been given a nickname, Stupendously large black holes or SLABS for short.

Whether or not Stupendously large black holes can even form in the first place is up for debate, as scientists remain uncertain about how even regular supermassive black holes are born.

Like most things in space, there is still a lot to learn about these mysterious, dark objects and although TON 618 is currently the black hole King of the universe, there may well be another, even larger one waiting to take that top spot. 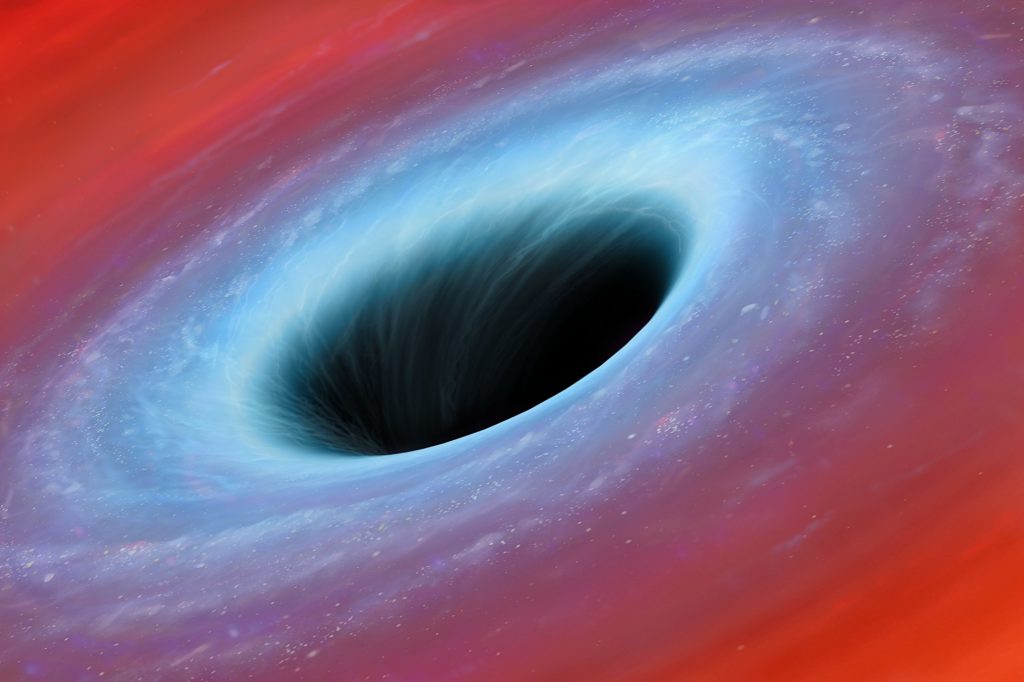 Within the Milky Way Galaxy alone, it is estimated that between 10 million and a billion black holes exist, many of which lead isolated lives making them impossible to detect. We can only really observe the gravitational effects of the most active, most massive and most extremely positioned black holes in the universe. This means that we have only discovered a tiny fraction of what might be out there.

Because light cannot escape, black holes cannot be directly observed. But we can detect them using special telescopes that can see how matter is affected around a black hole, allowing scientists to study these mysterious objects further. Although these cosmic monsters are effectively invisible, we have managed to image the hot disk of material that encircles one.