Discovery Of A Swarm Of ‘Black Holes’

Within the ‘Milky Way galaxy’, it is estimated by NASA that between 10 million and a billion ‘black holes’ exist, most of which are thought to lead fairly isolated lives. But astronomers using the Hubble space telescope have recently announced that they have discovered something unexpected, not one, or even two, but a swarm of black holes concentrated at the heart of an ancient, enormous cosmic structure that is almost as old as the universe it’s self.

For the first time, astronomers from the Paris Institute of astrophysics have detected a swarm of black holes crowding the core of a dense globular cluster named NGC 6397. A Globular cluster is a densely packed collection of ancient stars and NGC 6397 is just one of more than 150 known to exist within the Milky Way Galaxy. 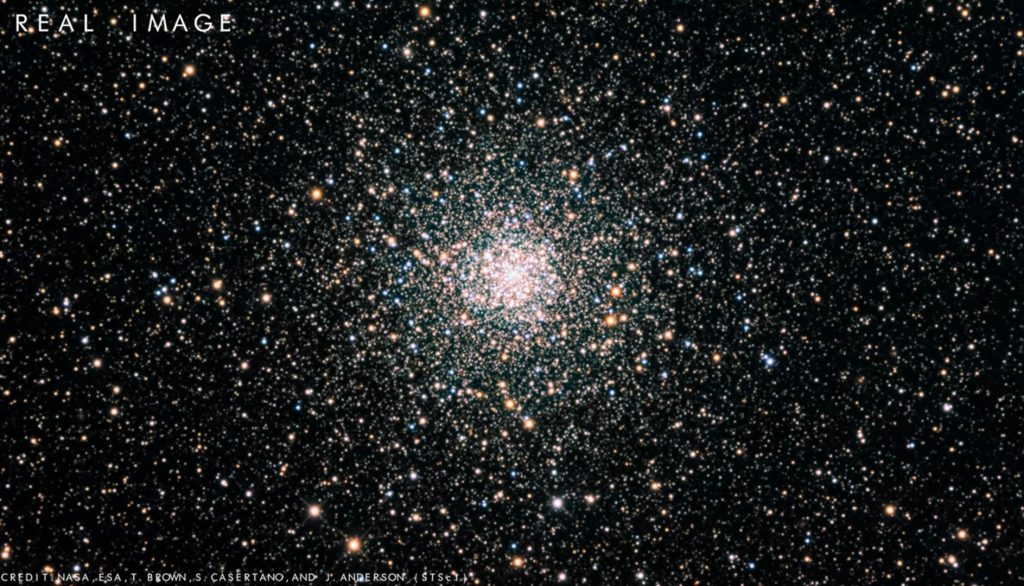 The enormous cosmic structure contains around 400,000 stars, most of which are tightly bound by gravity and populate the centre. It is located only 7,800 light-years away and is one of the closest to Earth, making it one of the easiest to study. Astronomers studying NGC 6397 originally thought that at the centre of this massive star cluster lurked the elusive and long sought after “intermediate-mass black hole”.

This type of ‘black hole’ is thought of as the “missing link” between the already known, supermassive black hole, which can be found at the heart of most large galaxies and the smaller, stellar black hole, which are the remains of collapsed massive stars.

Although the existence of intermediate-mass black holes is widely debated, a few candidates have been identified and the centre of NGC 6397 was thought of as an ideal target. But when astronomers looked for this elusive object, they were surprised to find not one, but more than 20 stellar black holes instead.

Because black holes cannot be observed directly, astronomers used the Hubble space telescope and the Gaia space observatory to peer inside of the globular cluster and measure how the stars were moving. Because the more mass at one location, the faster the stars travel around it.

Over several years of observing the tiny movements made by the tightly packed stars, astronomers were able to calculate the distribution of mass within the centre. But instead of finding a point-like mass affecting the stars around it, which would be expected for a single, solitary intermediate-mass black hole, they found a mass that appeared to be spread more randomly. Suggesting that the stars near the centre of NGC 6397 were being affected by a concentration of stellar corpses, including white dwarfs and neutron stars, but mainly multiple stellar black holes.

The researchers concluded that this mysterious family of at least 20 black holes must have progressively sank to the centre of the globular cluster, after gravitational interactions with nearby less massive stars. The discovery of this black hole family, also offers an exciting possibility according to astronomers, the possibility that the tightly packed horde of black holes may one day merge, causing gravitational waves to ripple through space-time. An event that scientists would be able to detect using the Laser Interferometer Gravitational-wave Observatory or LIGO as it is more commonly known.

Like most scientific discoveries, more questions are raised than answered and although the elusive intermediate-mass black hole wasn’t identified, a swarm of stellar black holes at the centre of a dense globular cluster was for the first time, and surely we will hear much more about this mysterious stellar graveyard as further studies are completed.